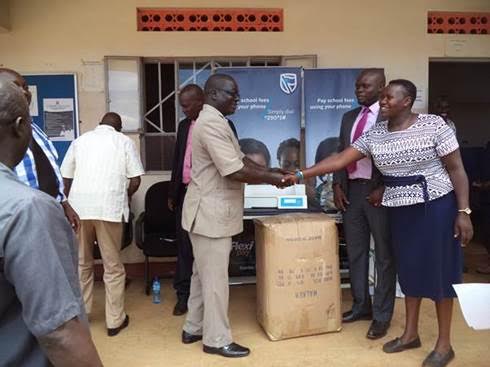 The Stanbic Bank team in the Kapchorwa Branch recently handed over much needed maternity equipment including a special delivery bed for expectant mothers, a digital weighing scale for new-born babies and 30 pairs of bed-sheets to Bukwo General Hospital.

The donation was made in response to an appeal by the Bukwo hospital administration who indicated these basic items were lacking in the hospital and acquiring them would dramatically improve the welfare of expectant mothers and increase the chances of survival of children born in the hospital.

Speaking at the handover ceremony, Stanbic’s Regional Manager, Samuel Ocanya said “this initiative involved every single member of staff working in the branch who each made a personal contributions to the cause.”

He continued “As a bank we aim to transform lives of people in the communities where we operate. This is only possible if our staff who are on the ground are personally involved in CSI initiatives because they understand the unique challenges the people they serve face”.

Thanking bank staff after receiving the items the Resident District Commissioner for Kapchorwa who was the chief guest event commended the bank staff for their gesture which he said was a very positive step in the right direction “the availability of even the most basic maternal health equipment is one of the biggest problems that we face in the district”. This donation sends a big message that the bank cares for us and are looking to make a difference, “I suggest similar initiatives be done on an annual basis to strengthen the existing good relationship between Stanbic Bank and the community”.

Other officials who attended the event included the the Chairman LCV; the Chief Administrative Officer; the District Health Officer and staff of the hospital.