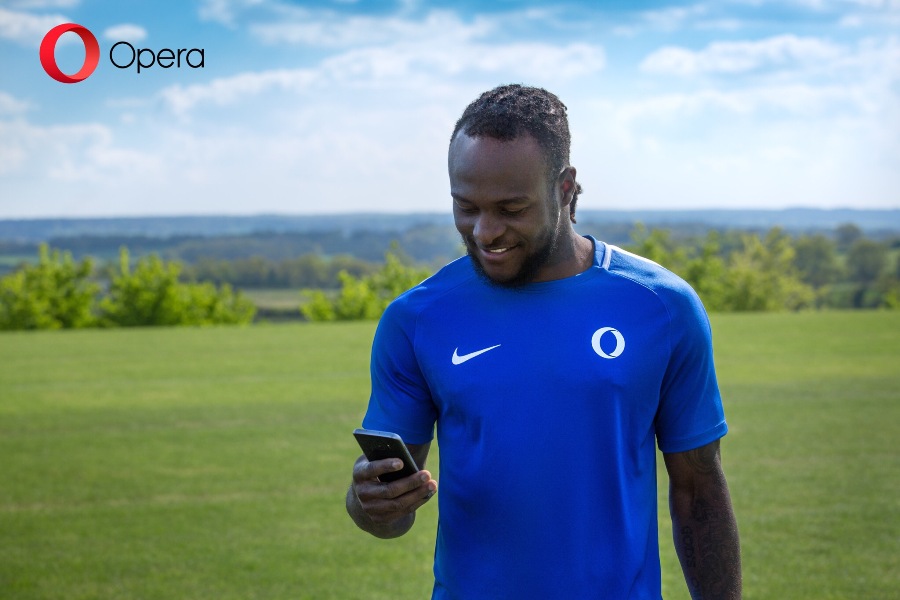 Moses will be the brand ambassador of Opera Mini, the most popular browser in Africa.

Starting today (15th May, 2017), Moses will be featured in the new Opera Mini TV commercial as well as a range of collaborative projects extending throughout 2018.

“Football is one of the most popular types of content consumed by Opera Mini users throughout Africa”, says Jørgen Arnesen, Global Head of Marketing and Distribution at Opera. “Victor Moses is a perfect match for Opera, being not only a high performer, but also a great role model and natural ambassador of his home country Nigeria.”

This coincides with Opera’s recent announcement to invest $100 million in Africa over the next two years with the goal of strengthening the internet ecosystem in various countries.

Nigeria is home to the second largest population of Opera Mini users. Search, social networking and sport are the most popular content consumed by Opera Mini users in this country. One fourth of them check out live scores and sports news when browsing. This number is relatively higher than the ones in other African countries.

On the topic of the recent partnership, Victor Moses states, “I am proud to be in partnership with Opera and am looking forward to working together. The Opera team have taken me through their plans and vision for the brand in the Nigerian market and it’s made me incredibly excited about the future. I’m delighted to be a part of such a groundbreaking campaign.”

Opera recently launched its first nationwide TV and radio commercials to announce a faster and more affordable internet experience with the Opera Mini browser. Already airing in South Africa and Kenya, there will be a special version for Nigeria. Victor Moses will be challenging his on-field speed against Opera Mini’s.

About Victor Moses:
Well known for his current Premier League signing with the top Premier League club Chelsea, the 26 year old has grown a successful career throughout the higher level leagues of the sport from an early age. This includes an earlier career boost with Crystal Palace, as well as performances for Liverpool, Stoke City and West Ham United. His outstanding performance has earned him “The Premier League’s most remarkable star” by The Sun.