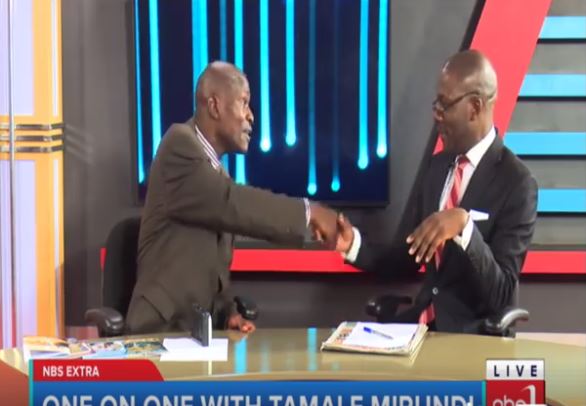 Mirundi on Tuesday last week attacked Muyanga live on NBS TV during the “One-On-One With Tamale Mirundi” show after he was irked by the host’s questions on a new Buganda Kingdom campaign, Kyapa Mu Ngalo which is intended to streamline land ownership and management in the monarchy.

However despite speculations that NBS would scrap off the “One-On-One With Tamale Mirundi” show from its programs, the aired again today (Tuesday, May 16th 2017) and Mirundi apologized for “over reacting”.

“I accept there was a mistake. I overreacted… but let’s move ahead,” Tamale Mirundi said.

I would like to apologize to all our viewers for all that did not got well during last week’s show,” said Muyanga.

This website understands that the “One-On-One With Tamale Mirundi” show will continue to air on NBS TV.