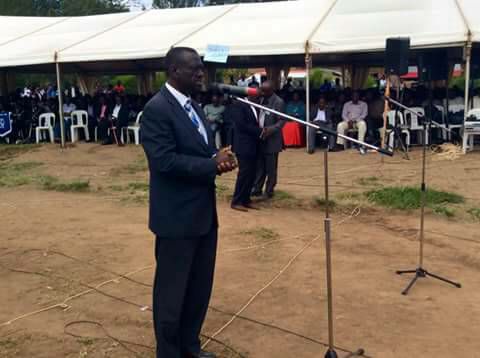 Four-time presidential candidate Dr Kizza Besigye has told supporters of Uganda’s three-decade president Yoweri Museveni that they should not claim to love the president more than those who followed him to the bush to topple what they were convinced was a dictatorial government of Milton Obote.

But he added: “What Byanyima fought for, truth and justice, have not come yet; Uganda does not work for all.”

He then reminded mourners that the people who now claim to love Museveni had rejected him over three decades ago.

He cited the example of Nyabushozi in Kiruhura where foreign affairs minister Sam Kuteesa defeated Museveni. He wondered why the people of Kiruhura now claimed to love Museveni more than those who risked their lives to go with him to the bush.

“In the 1980s, in Kiruhura in Nyabushozi, the people rejected Museveni and voted Kuteesa,” Besigye said, casting his eyes to look to where Kuteesa was seated.

Kuteesa was Museveni’s representative at the funeral where he delivered his boss’ message. Through Kuteesa, Museveni thanked Byanyima for once standing surety for him when his parents could not pay school fees on time, and for taking care of his parents during the bush war days.