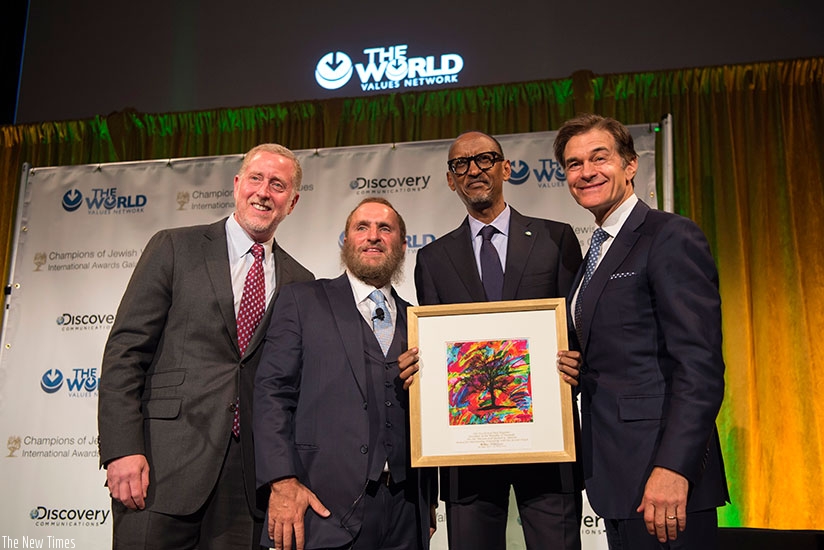 Rwandan President Paul Kagame has been awarded with the Dr Miriam and Sheldon G. Adelson Award for Outstanding Friendship with the Jewish People from the World Values Network.

The award was presented, at the World Values Network annual gala in New York, US.

It recognises President Kagame’s role in the fight against genocide as well as in contributing to Rwanda’s relations with Israel and the global Jewish community.

While presenting the award to him, Dr Mehmet Oz described him as a champion for human dignity and a fearless leader.

Speaking while accepting the recognition, President Kagame said that for a Rwandan, friendship with the Jewish people is entirely natural given the shared history.

He noted that human dignity was at the centre of everything and it was the duty of all to protect it and curb all ideas and tendencies of hatred.

“Hatred can never be justified, irrespective of whatever grievance one may hold. It may not be easy but it is our responsibility to keep this corrosive emotion in check and out of public affairs. More generally we must always endeavour to be different from those who adhere to ideologies of hatred,” said Kagame.

He highlighted the role of forgiveness and reconciliation in rebuilding countries and societies after atrocities.

“As we know, acts of repentance and forgiveness among brothers and sisters are what have allowed us and allowed the divided family of Jacob to reconcile and ultimately become the nation of Israel which endures today. In Rwanda we see similarities with this lesson, everyday Rwandans are devoting themselves to the urgent task of deepening our national unity.”