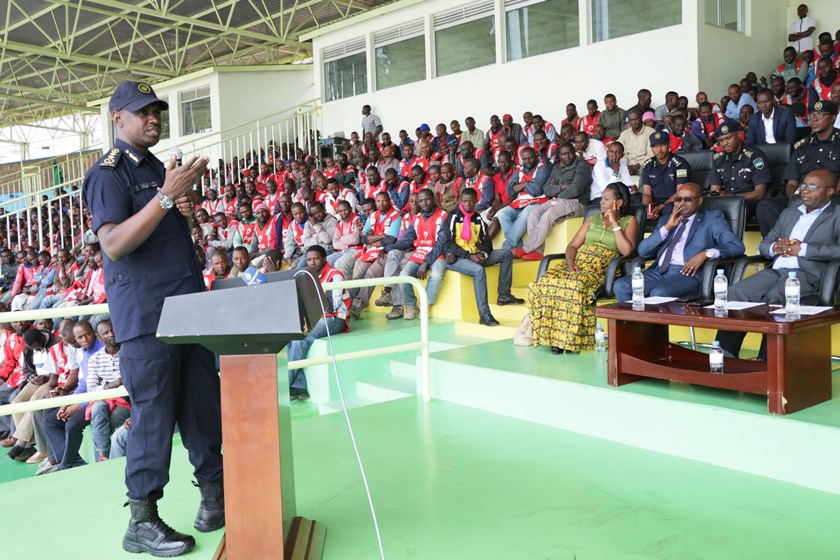 Rwanda National Police, yesterday, launched the campaign to curb road carnage, with open discussions with motorcyclists on effective usage of road and persistent issues within their cooperatives.

The official launch was held in the City of Kigali where thousands of road users majority motorcyclists converged at Kigali Stadium in Nyamirambo under the auspice of the ongoing Police Week.

Statistics indicate that about 71 percent of the total road accidents registered since the beginning of the year were either caused or involved motorcycles, pedestrians, and bicycles.

However, commercial motorcyclists take lead in causing accidents, according to the statistics, which is attributed to their recklessness and indiscipline including drunkenness, violation of traffic lights, abuse of Zebra Crossings, and dangerous maneuvers such as overtaking in hotspots. This remains a problem not only in Rwanda but throughout the world. From violating traffic rules to riding on the pedestrian lanes, motorcyclists have been wreaking havoc worldwide. What is needed is some strict regulations and some safety equipment like installing steel bollards along the pedestrian lanes so that the lives of innocent ones are not put at risk due to these reckless bikers.

The open discussions also include internal issues within the federation of motorcycle cooperatives, with members raising issues pertaining to alleged office abuse, financial irregularities, and rough handling of motorcyclists by their security personnel.

Other issues raised by motorcyclists were delayed or denied issuance of monthly financial membership contribution receipt and RURA transport authorization permit, where their leaders are said to go further to solicit bribes as a prerequisite to acquiring a service.

The State Minister in charge of Transport, Alexis Nzahabwanimana, who presided over the official launch of the road safety week, said that the government is “committed to implementing all possible strategies to enhance road safety measures” which will further curb the road carnage.

“The government is well aware of challenges faced or caused by commercial motorcyclists and remains committed to addressing them. We will continue promoting modern technology to support efforts of keeping our roads safe and security intact,” the State Minister said.

The Deputy Inspector General of Police in charge of Operations, Dan Munyuza appealed to road users and motorcyclists in particular to change their attitude on road and respect road safety standards.

“Most of these road accidents are avoidable if traffic rules are strictly adhered to by all road users. Reckless use of road means putting lives of other road users at risk, which we can’t afford,” DIGP Munyuza said.

The Deputy IGP also challenges motorcyclists to be vigilant and report anyone whom they suspect or witness committing a crime, or attempt to use them in criminal activities.

It is alleged that over 90 percent of drug traffickers and thieves use motorcyclists to commission the crime.

On the issues of indiscipline, the DIGP noted that police may consider suspending the driver’s license of the offenders if its a better option to prevent a crime or accidents.

The Mayor of the City of Kigali, Pascal Nyamulinda also appealed to taxi-moto operators to use their exposure in fighting against all sorts of crimes, and commended RNP for its continued efforts in ensuring security and supporting hygiene programmes in Kigali.

The mayor, however, noted that that not all motorcyclist are undisciplined, “there a few bad apples causing the malfunctioning in the motorcyclist transport business which you should collectively fight.”

Meanwhile, concurrent road safety awareness campaigns were held across the country especially in schools where students were sensitized on safe road usage.

The road safety week will also include radio and TV talk-shows on road safety and other forms of sensitization using online and print media platforms.