South Sudan rebels under the leadership of the country’s former First Vice President, Riek Machar have accused government forces of allegedly targeting civilians in rebel-held areas in violation of a unilateral ceasefire President Salva Kiir declared in May.

In a statement, the rebel spokesperson Brig. General William Gatjiath Deng accused President Kiir of blindfolding the international community by declaring a unilateral ceasefire in public and allegedly ordered military assaults on rebels.

“For the last one month or so, after blindfolding the African Union, United Nations, the Troika and indeed the international community with the so called unilateral cease-fire, General Salva Kiir Mayardit and the Jieng Council of Elders (JCE) regime in Juba have been extremely busy struggling and directing the offensives against civilian targets and SPLM-SPLA (IO) positions across South Sudan, including in and around Maiwut,” partly reads the statement issued on Sunday.

South Sudanese government officials were not readily available to comment.

He said the Juba-backed troops killed at least 30 civilians, injured many people, and burned down 130 huts and makeshift houses.

The rebel official’s claims could, however, not be independently verified.

Brig. Deng, in the statement, downplayed the significance of the recent defection of Lt. General John Kenyi Loburon, saying the latter had no impact on the gallant rebel forces in Central Equatoria state.

He said the groups, calling themselves the Jikany Nuer community, were simply self-seekers and “propaganda arm of the Juba regime”.

The move, the community said in a statement, saved many peoples’ lives.

Meanwhile, the community leadership in Ethiopia has called upon all the Jikany in the armed opposition movement to join the peace forces in line with the decisions taken by the four officers.

Their decision, they said, is in line with the position of IGAD [Inter-Governmental Authority on Development] that calls for all armed groups in South Sudan to lay down their weapons and join the implementation of the 2015 peace deal signed in Addis Ababa.

South Sudan’s civil war broke out in mid-December 2013 after President Kiir accused his former deputy Machar of plotting a coup, which the latter vehemently denied.

However, a peace deal signed in August 2015 led to the formation of a coalition government but was again devastated by fresh violence that broke out in July last year. 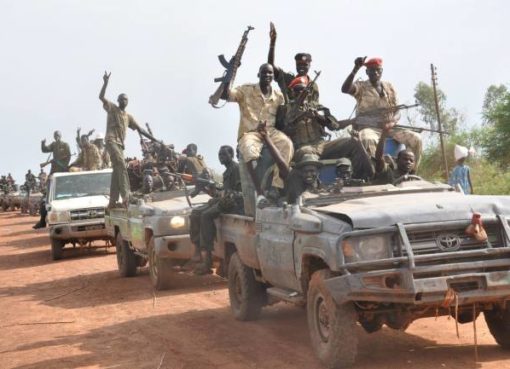