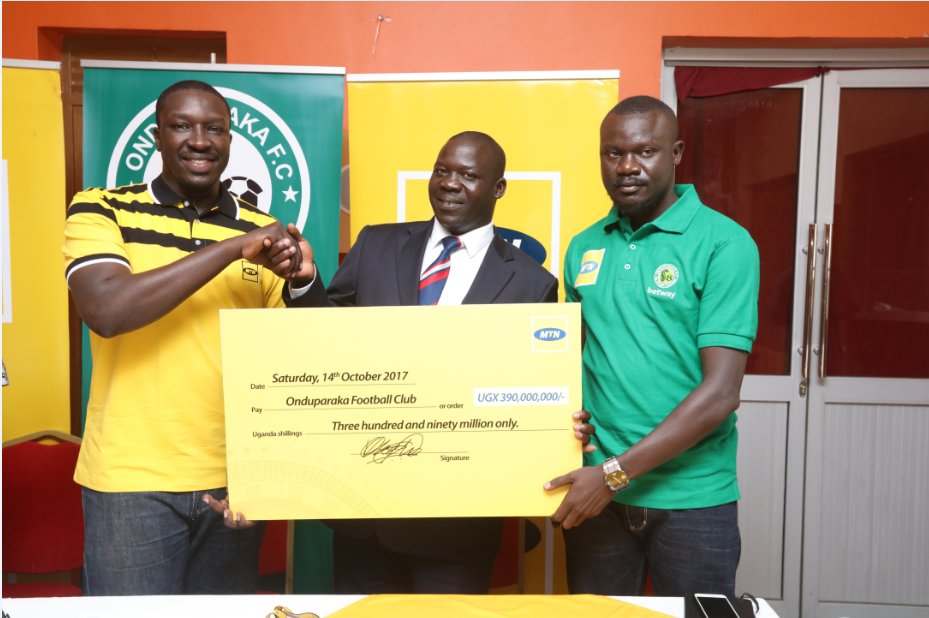 For the 2017/18 Uganda Azam Premier League season, MTN Uganda has agreed to sponsor Onduparaka to a tune of Shs390m.

Announcing the sponsorship to Onduparaka FC on behalf of the MTN Uganda CEO Wim Vanhelleputte, the Corporate Communications Manager at MTN, Val Oketcho said, “The Onduparaka brand and wide fan base has been on a steady path of growth ever since the club was promoted to the Uganda Premier League. We admire the club’s humble beginnings, its footballing successes so far including the ability to spot and groom upcountry footballing talent to compete on the national stage. This Ugx.390m sponsorship to Onduparaka is a sign of our commitment to ensure that the brand continues to grow further successes in resonation with our growth over the years in Uganda. We believe that it will go a long way in improving the Onduparaka brand and the welfare of the players.”

The additional sponsorship to Onduparaka FC further cements MTN’s love for unifying the game of football and the desire to continue supporting Ugandan sport.

Noting the wide fan base that the sensational Onduparaka FC currently enjoys both at home in Arua and nationally, Okecho remarked, “Our desire as MTN is to support the development of sports in Uganda and this will see us continue to identify opportunities where we can inject the required support from time to time. We are proud to associate with Onduparaka FC and we wish them success this season of the Uganda Premier League.”

The unveiling of the sponsorship was held at Desert Breeze Hotel in Arua.

In the past MTN Uganda has sponsored the Uganda Cranes national teams in football and cricket, a club in the national rugby league and the National Basketball League. MTN also supports athletics in Uganda, including the largest Marathon event every year, the MTN Kampala Marathon due on the 19th November 2017.

Speaking on behalf of Onduparaka FC, the Chairman, Benjamin Nyakuni said, “We would like to thank MTN for their very generous sponsorship for our team this season. It has really sent a buzz through the entire team and the fans especially. We welcome MTN to the Onduparaka family and we receive this landmark sponsorship with such great honor.”

Adding, “This sponsorship is timely, given where we are now as a club. We have looked to this moment for a long time given that MTN is one of the biggest contributors to sports development in this country. This achievement is not just for us but also for the entire West Nile as a region and we can only envision the ripple benefit for all of us. Welcome to the Onduparaka FC family”.

Bouyed the financial boost support, from MTN Uganda, “the Caterpillars” as they are nicknamed, later hosted their home fans to a Uganda Premier League fixture against Soana FC at the Green Light Stadium.