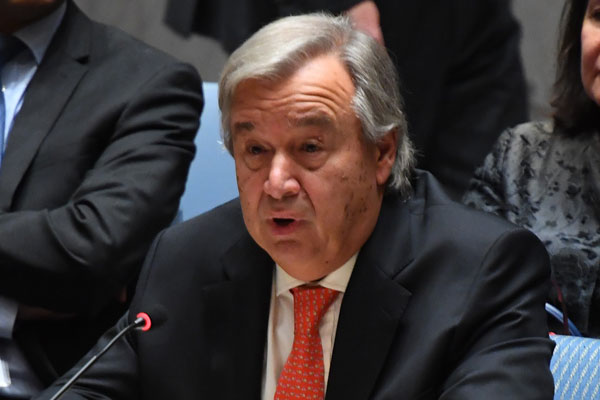 South Sudanese forces stopped a UN peacekeeping convoy at gunpoint and beat the unit’s commander in the latest clash with peacekeepers in the war-wracked African country, a report obtained by AFP on Thursday said.

UN Secretary-General Antonio Guterres told the Security Council that South Sudan’s defence minister had apologized for the September 21 incident in Juba, the capital.

About 100 officers from South Sudan’s national security service “surrounded the convoy and pointed weapons at the vehicles,” said the confidential report sent to the council on Monday.
“At one point the contingent commander accompanying the convoy was physically assaulted before diverting to UN House,” in Juba, it added.
Guterres listed 17 incidents during the month of September when convoys were blocked, peacekeepers harassed and in some cases detained by South Sudan’s forces.

US Ambassador Nikki Haley is scheduled to visit South Sudan next week as a new regional push to end the war appears to be struggling to get off the ground.
UN peacekeeping chief Jean-Pierre Lacroix told the council on Tuesday that the government had given a “lukewarm response” to the new peace initiative by the regional IGAD group.
Tens of thousands have been killed and millions uprooted from South Sudan since 2013 during a conflict characterized by rape, ethnic massacres and attacks on civilians.

In his report, Guterres said he was reviewing the 14,000-strong UNMISS operation in South Sudan and would present his recommendations to the council before it decides on extending the mission in December.

The United States is South Sudan’s biggest aid provider and a key supporter of its 2011 independence from Sudan.

Machar is living in exile in South Africa after he escaped heavy fighting in Juba last year, but the fighting rages on.