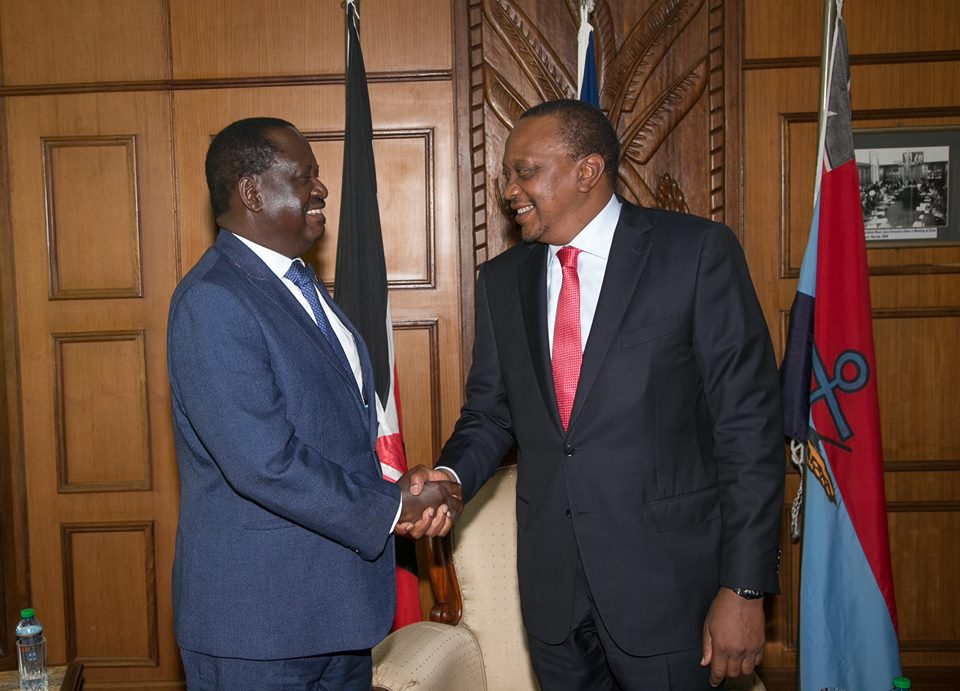 It was the first time the two were meeting face-to-face since their fallout following the hotly contested August 8, 2017 General Election and October 26, 2017 repeat presidential poll that Mr Odinga boycotted.

The agenda of the meeting centred on how to unite and heal Kenya following a divisive General Election in 2017.

In a joint statement, Mr Kenyatta and Mr Odinga promised to work together to halt the country’s descend into the abyss following a divisive 2017 General Election.

They expressed their desire to aside their differences and reconstruct a nation that is responsive to the urgent need for prosperity, fairness and dignity for all Kenyans.

“There are changes in our system of governance for us to succeed and we have been in the process of reform to deal with them for the last 20 years,” Mr Odinga, who read the joint statement, said.

“Despite all the reforms, we continue to have a deep and bitter disagreement. Ethnic antagonism and divisive political competition have become a way of life.”

Mr Odinga said the political differences that have divided more than four Kenyan generations “must now come to an end”.

On his part, Mr Kenyatta said they had agreed to put the interests of Kenya and Kenyans first.

They agreed to roll out a programme to effect their shared objectives revolving around war on corruption, ethnic antagonism and competition, lack of national ethos, inclusivity, devolution and divisive elections.

To implement the programme, the two formed a taskforce, co-chaired by lawyer Paul Mwangi and Ambassador Martin Kimani.

The two leaders urged Kenyans to overcome negative ethnicity “by acting on the understanding that elections on their own are not solution to our national challenges.”

All Kenyans, they said, should faithfully adhere to the Constitution and rule of law, and halt antagonism and tribal profiling.

The two leaders did not take any questions from journalists.

The address and meeting come on the day US Secretary of State Rex Tillerson is expected to land in Nairobi on his tour of Africa.

Some Nasa and Jubilee party leaders welcomed the meeting and its resolutions, saying it would help heal Kenya.

Deputy President William Ruto took to Twitter to thank his boss and former boss on their agreement.

“Congratulations Pres Uhuru & Raila for being statesmen. You have risen to the moment for kenya and against hate, negative ethnicity and division,” he tweeted.

“The unity, stability and transformation of Kenya supersedes all other partisan interests. Wangwana mubarikiwe mpaka mshangae (gentlemen, be blessed abundantly).”

“The country will now be in the right shape now that the leaders can sit together despite the long and difficult political period we have had,” he said on the sidelines of a regional meeting in Kisumu.

“On behalf of the people of Homa Bay, I congratulate my party leader for taking this bold decision.

“It is a decision that ordinary people cannot take. We are very encouraged and motivated by this because it will open our country to better things. This is a welcome gesture.”

Mr Odinga and his co-principals in Nasa have been pushing for talks with Mr Kenyatta on electoral justice and reforms.

President Kenyatta had rejected their calls, saying he is only ready for dialogue on development and how to take Kenya forward.

Mr Odinga, who had vowed not recognise Mr Kenyatta’s election win and presidency, had threatened to lead a resistance movement against the Jubilee administration.

The Nasa leader, in a protest move and an open show of defiance, took a mock oath of office as the people’s president on January 30.

He insists he won the August 8, 2017 presidential poll but the figures were manipulated in Mr Kenyatta’s favour.

The president and the electoral commission dismissed his claims.