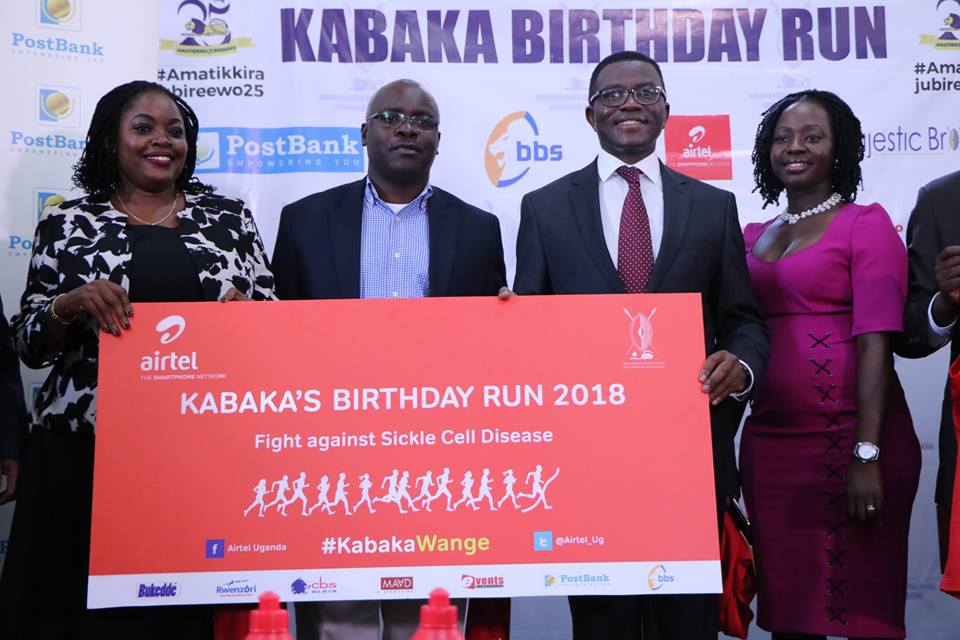 In line with the three – year theme announced last year – Fight against Sickle Cells, proceeds from the run will also be directed towards fighting the sickle cells disease in Uganda.

Last year, Airtel Uganda, in partnership with the Buganda Kingdom, handed over 60,000 sickle cell testing kits, bought from the proceeds of the Kabaka Birthday Run 2017, to the administration of The Uganda National Health Laboratory Services to enable them carry out conclusive testing for the prevalent disease. The kits would allow over 120,000 people to test for the sickle cells disease free of charge.

Commenting about the sponsorship, Airtel Uganda Managing Director Mr. V.G. Somasekhar noted that Corporate Social Responsibility is very central to Airtel and is an integral pillar of the business.

“Through our partnership with the Buganda Kingdom, we have been able to change the lives individuals and communities in Uganda. This year, we intend to continue this life changing work by collecting funds that will be used to educate Ugandans about sickle cells, enable proper treatment of patients and fund research into how best we can contain it,” he stated.

Somasekhar added that besides Kabaka Run, Airtel Uganda has been involved in other successful CSR programmes like Together we can which won the Best CSR campaign award 2017 and Adopt a school which focuses on the transformation of dilapidated schools to provide a better learning environment.

Various health camps across the country offering free medical services to underprivileged communities have also been held in partnership with the Ministry of Health among other partners.

The Katikkiro of Buganda, Owek. Charles Peter Mayigga thanked Airtel Uganda and other partners; such as the Ministry of Health in the Central Government and Uganda Sickle Cell Foundation, for their sponsorship, which has brought awareness and funding to illnesses that have dominated Uganda for many years.

“First, we worked together to tackle fistula and now we are focusing on sickle cells. With strategic and consistent partners such as Airtel Uganda, we shall win the fight against these sicknesses that are claiming lives of very many Ugandans,” he commented.

The run will be held on 8th April 2018 and participants will be flagged off in LubiriMengo by His Majesty the Kabaka for the 5km, 10kms and 21km routes.