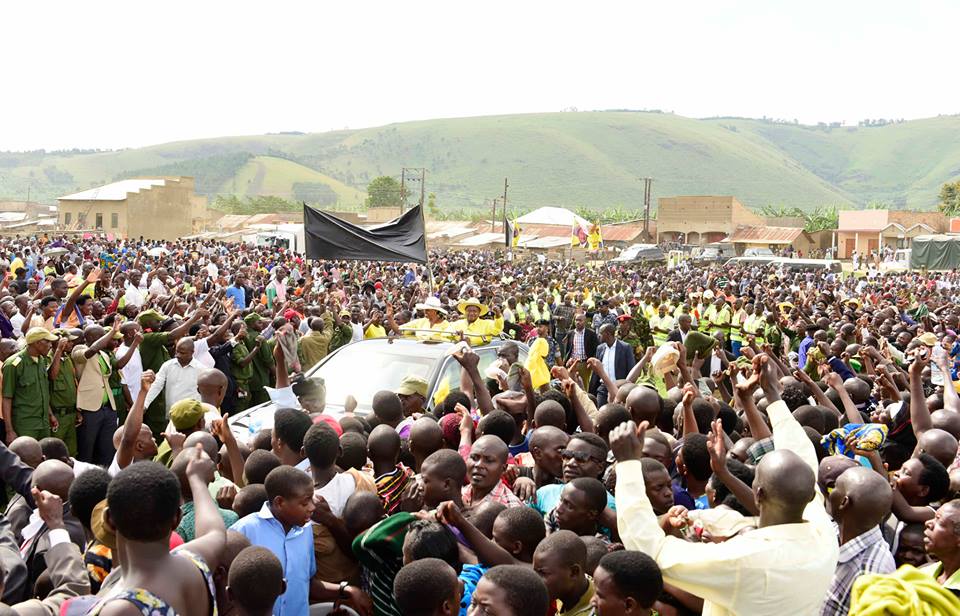 President Yoweri Museveni, who is also the National Chairman of NRM Party, has hailed his wife Janet Museveni for getting Ruhama County and Ntugamo District to support NTM.

“I congratulate you and thank you for supporting the NRM. To choose an active and constructive leader in politics, means promoting development. When Ruhaama County was being led by the opposition, there was no development not until Maama Janet Museveni came to represent you as an MP that you started receiving government services – electricity, tarmac roads, schools and health facilities. This is because Mama Janet Museveni had in mind a commitment for national development,” he said.

The President was on Monday speaking at Kahiija Primary School playground of Kabingo Parish in Nyakyera Sub-County, Ruhaama County in the district of Ntungamo during the NRM victory celebrations following the winning of Ruhaama Constituency by NRM’s Kahima Moses Mugabe as the area MP in a by-election that was occasioned by the passing on of former MP, late William Zinkuratiire.

The President was accompanied by the First Lady and Minister of Education and Sports, Hon. Janet Museveni who is the Ntungamo District NRM Chairperson and also former Ruhaama Constituency legislator.

The President appealed to the people of the area in particular and Uganda as whole to endeavour to conserve the natural environment especially the wetlands.

“In creation, God separated swamps from the dry uplands. To provoke God’s power is dangerous. Conserve the wetlands and you will realize that they are more economically productive,” he said. He enumerated to them the usefulness of swamps as being sources of water for irrigation, grass for mulching, fish farming in ponds and papyrus for paper manufacturing, among others.

Regarding health issues, President Museveni challenged parents to take time off their busy schedules and endeavor to guide the youth about the disadvantages of leading risky life styles so that they avoid HIV/AIDS scourge. He also called on parents to mind so much about the good nutrition of children if they value effective development of the brains of they young people. The President used the occasion to announce a pledge of 400 corrugated roofing iron sheets and other building materials for Kahiija Primary School.

The First Lady, Hon. Janet Museveni, on her part thanked Ruhaama County electorate and NRM leaders for being open, transparent and for their overwhelming support to the NRM Party.

“With the support of the new MP, Kahima Moses, Ruhaama and Ntungamo District will prosper, she noted. She added that Ruhaama County should be nurtured as a model for development for others to learn from.

The new MP, Kahima Moses Mugabe pledged loyalty “to the Movement system of governance throughout my life time.”

He said that the celebrations marked the victory of NRM and served to extend appreciation to the electorate for supporting the Movement in their area. He revealed that development projects have taken and will continue to take route in the areas as exemplified by the construction and tarmacking of Mirama Hills road. He said that plans are underway to build the Eriya Kategaya Memorial School, the construction of Maama Janet Museveni Girls’ School and the extension of electricity deeper into rural areas, among others.

Ntungamo District Women Representative, Ms. Beatrice Rwakimari, observed that the big turn up by the people at the ceremony was a reflection that the local communities commend the government’s infrastructure programmes and services’ delivery in the area.