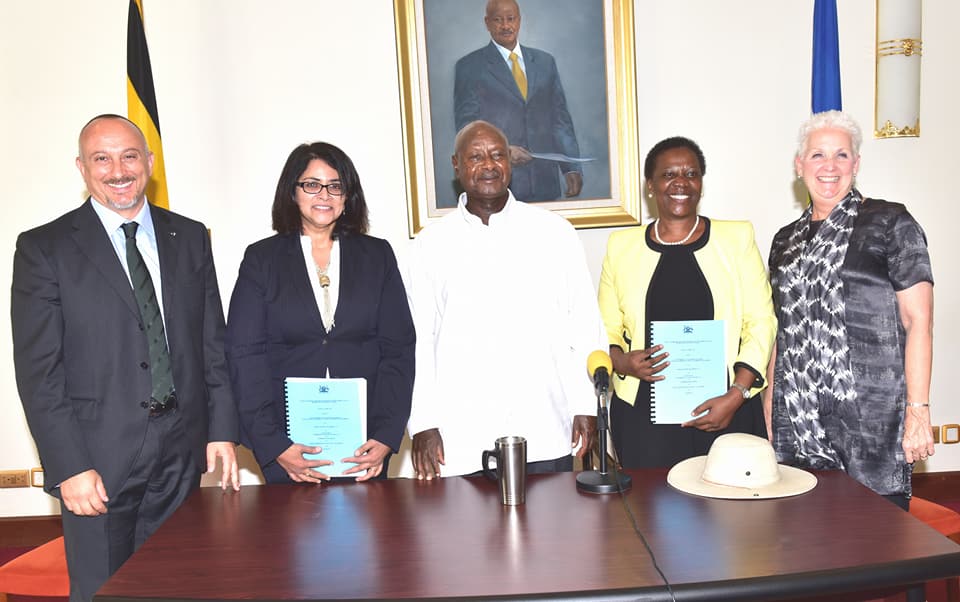 “There is a lot of sleeping in Africa. You find people who should know but instead don’t know,” said the President. “And also there has been sleeping in the West, they don’t care about what potential is in Africa.”

The President made the remarks today at State House Entebbe as he witnessed the signing of the Project Framework Agreement between the government and the Albertine Graben Refinery Consortium (AGRC).

The agreement will ensure development, design, financing, construction, operation and maintenance of the oil refinery in Hoima District.

President Museveni said unlike China which seems to understand Africa’s potential and has been active in doing business with Africa, Western companies have been reluctant in taking up projects and investing in the continent.

“Africa is going to be a huge power house in terms of business,” said the President, who noted that African leaders and the NRM government in particular have resolved some of the obstacles to doing business like fragmented markets and confiscation of private companies by past regimes.

While congratulating the parties to the agreement, President Museveni said the composition of the AGRC showed that Western companies were also waking up to realise Africa’s potential.

“Africa and the West share a lot of history together and there is a need for them to use these past linkages to further economic business,” said the President.

Uganda is represented in the consortium by the Uganda National Oil Company (UNOC), which is a limited liability petroleum company owned by the government.

Under this agreement, AGRC will be responsible for funding the pre-FID activities listed above and will also proceed to construct and operate the refinery.

The consortium has also been tasked to ensure Ugandans get jobs and skills out of the project.

The refinery, which will be developed as a commercial undertaking with focus on the regional market, will supply products like kerosene, petrol, diesel, heavy fuel oils, among others.

The refinery will have a refining capacity of 60,000 barrels per day, relying on crude oil from Uganda.

The entire project will be implemented by a Special Purpose Company, the Refinery Company, that will be incorporated by the private investors and the Uganda Refinery Holding Company, which is a subsidiary of the Uganda National Oil Company.

The Energy Minister, Eng. Irene Muloni, said the signing ceremony marked the end of the selection process that commenced in January 2017.

She said her ministry had done extensive consultations before arriving at who to assign the project, estimated to cost between $3-4 billion.

Eng Muloni saluted President Museveni for the guidance provided throughout the entire process.

In her remarks, Dr Josephine Wapakhabulo, the chief executive officer, of the Uganda National Oil Company, said the development of the refinery will trigger a number of other investments in the energy-based industries, contributing to economic development and attainment of middle income status.

She added that the refinery will grow UNOC’s business portfolio and help unlock other planned investments at the Kabaale Industrial Park.

Ambassador Deborah Malac of the US, congratulated the government upon conclusion of the selection process, saying she hoped more business opportunities would emerge for American companies after this project.