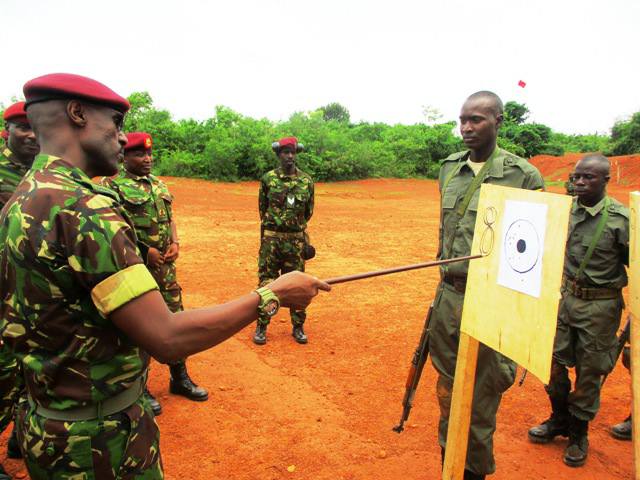 The Commander of SFC, Brig Don Nabasa, has presided over yet another pass out of 134 soldiers who successfully completed a six month course in martial arts with skills in marksmanship, at Amilcar Cabral Airborne School (ACAS) in Nakasongola on the 17th April 2018.

In his remarks, Brig Nabasa said that in order to successfully conduct military duties, one must be disciplined, focused and above all, ideologically upright. This is the same message he passed on to SFC trainees undergoing political Education and Leadership course.

“UPDF is charged with the responsibility of protecting the country from any threat therefore, troops ought to handle missions and tasks in accordance with the requirements of the state as opposed to individual soldiers’ interests,” he warned.

Nabaasa encouraged the troops to take on more courses (trainings) to enable them grow through ranks.

He however, cautioned against mingling with bad elements something he said will not be tolerated in the force.

A total of 07 officers and 382 men of the Special Forces Command (SFC) were passed out at different SFC training schools after completion of their courses.

Col Ssenfuka was pleased to note that 95% of the troops had mastered weapon handling techniques, a prerequisite for every militant in the UPDF.

“The troops’ presentation and display was reasonable” he added.

He strongly warned soldiers against leading reckless and disruptive lifestyle and also called on them to maintain the strategic relationship that exists between the civilian community and the defence forces since they are allies.

The function was attended among others by 1SFG Commander, Col Peter Candia, the Director of Personnel and Administration (DPA) Col Gerald Ahimbisibwe among others.