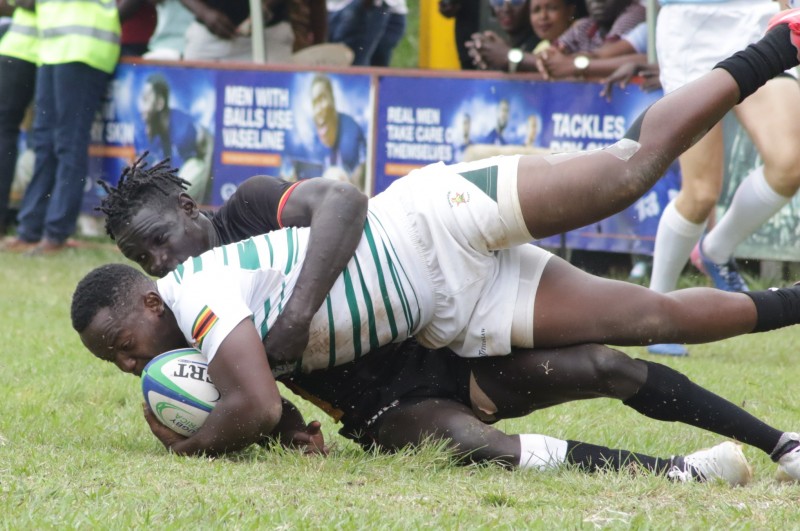 Zimbabwe, with intent on surviving the chopping block, started the game on the front foot and were through in the fifth minute after a try from Johannes Coetzee.

Flyhalf Mandivenga converted with ease to give the visitors a comfortable 7-0 lead. Uganda got a player into the sin bin and Tafadzwa Chitokwindo capitalized on the numbers to run quick through a disorganized defense to extend the Sables lead.

Uganda saved face with a try of their own through flanker Byron Oketayot, with Philip Wokorach converting. Zimbabwe were through again after Tafadzwa Mhende eased past Uganda’s sleeping defense and ended the half with his Sables leading 19-10.

Behaving like a home team, the Sables kicked off the second half with as much enthusiasm as was with the first and not before long, they were over through Tafadzwa.

They failed to convert though. Phillip Wokorach switched on his goose-stepping feet and did away with three sables before offloading to Martial who released Michael Wokorach and the center scored Uganda’s second try of the day.

The Zimbabwean train was back again on the prowl and caught Uganda’s defense short on the wing, to gift Shayne Makombe with a try. The Sables closed the show with another try down the wing to confirm the win and secure Gold Cup rugby for 2019.

Zimbabwe’s win was their first and only win of this year’s campaign and it was enough for them to secure Gold Cup for another year regardless of the result in Tunisia later in the day.

“It was a very good game. Credits to my boys without whom I wouldn’t have been voted man of the match. Uganda were a good team, one of the good contests,” said Jeremiah Jaravaza, the man of the match.

Both sides were similar; scrambled defenses. I am happy to be an African, and with some money added, the game will be better.

“We are going to enjoy this tonight. We stayed in the competition. We have some matched to go build on and be accountable going into next year,” remarked winning coach De Villiers of Zimbabwe.

“The boys are gutted. We didn’t start with the energy that we needed today and but at the end of the day, credit to Zimbabwe. They played particularly well. But we shall be back because we finished third but it doesn’t take away the fact that it hurts and the boys are hurting,” said a remorseful John Duncan, the coach of Uganda Cranes.

“Definitely, it (the win) was long overdue. It means a lot to our nation and we really wanted to stay in group 1A and we managed that. In 2 to 3 years, this will be the team to beat,” said a joyful Denford Mutamangira.

It is disappointing losing this game but we are still up in Tier 1A. I won’t say we were complacent because we made a few mistakes in there, and two yellow cards let us down. Playing 14 men (against 15) for 20 minutes is not good at all,” said Uganda’s skipper Asuman Mugerwa.

Abdelaziz Bougja, chairman of World Rugby’s African association, Rugby Africa said: “By winning with a bonus point in Kampala, Zimbabwe did everything they could to maximize their chances to start in the gold cup next year. It is the end of the rugby Africa gold cup for Uganda and Zimbabwe, it has been a fierce competition well done to both teams.”

Nicolas Pompigne-Mognard, Founder and CEO of APO Group the main Official Partner of Rugby Africa, said: “It was amazing to see such a passionate crowd in Kampala today. Zimbabwe and Uganda definitely have a growing rugby fan base and cannot wait to attend the Rugby Africa Gold Cup 2019!”

Both teams played their final game of the year, as Zimbabwe secured Tier 1A rugby in the Gold Cup for 2019 while Uganda were confirmed for third on the log.