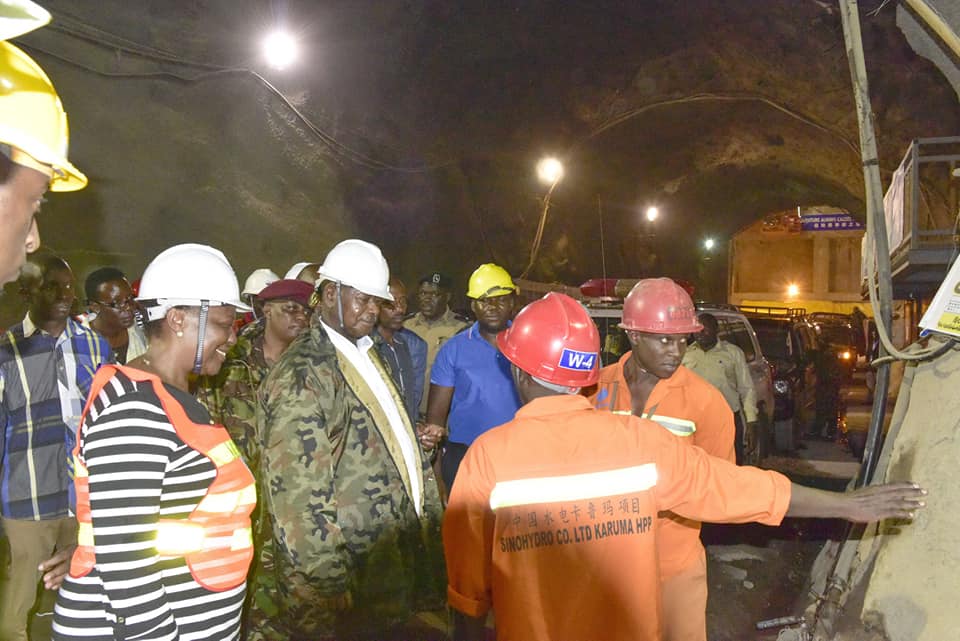 President Yoweri Museveni has urged local leaders in Nwoya and Kiryandongo districts to identify land for skills training institutions that will empower youth to be employable.

The President was today speaking to staff of Uganda Electricity Generation Company Limited (UEGCL) and the community around the 600mv Karuma hydropower project in Mutunda Sub county, Kiryandongo district where he inspected the ongoing construction works.

Upon arrival, the president, who was received by the Minister of Energy and Mineral Development Irene Muloni and a team comprising executives from UEGCL, UETCL and the Contractor Sinohydro; was taken on guided tour of the site starting at the Dam and intake section, the underground Power house and other caverns through the labyrinth of ducts and tunnels.

The Presidents’ working visit to the project comes five years, since his ground breaking ceremony he officiated at in August 2013.

“I came here to see the progress of work and what I will not be able to see in future; the power house and the dam before being swallowed by water. Karuma is a Uganda Government dam, built with our own money with a soft loan from China,” he said shortly after a grand tour of overland and underground construction work.

He commended the Chinese Government for enabling the soft loan. He also hailed Sinohydro, the main contractor of the electricity infrastructure for the good work of ensuring the provision of 600 megawatts instead of the initial 200 megawatts that was suggested by the other companies.

Museveni tasked the district officials of Kiryandongo and Nwoya to identify and allocate pieces of land for the establishment of industrial parks. He said that such parks would assure value addition for various agro products and employment for the people.

The Chinese Ambassador to Uganda H.E. Zheng ZhuQiane said that the dam is testimony of the good economic relations between China and Uganda and has provided employment opportunities to hundreds of Ugandans.

The minister however said the completion date for the whole project will be in July 2019 following insufficient funds to carry out compensations associated with the implementation of the resettlement action plan.

“The progress of the interconnection project was hindered by insufficient funds to carry out compensations. Only about 70% of the required project land has been acquired to date. The delay to effect compensations has necessitated re-valuations of compensation packages thus escalating costs,” she said. Muloni however said the Ministry of Finance, Planning and Economic Development has now availed the funds in this financial year.

The project was initially planned to be complete by December 2018 as per existing contract but it has now been pushed to July 2019.

Karuma Hydro Power Project is financed by both the Government of Uganda and Exim Bank of China. The Government of Uganda contributed 15% as counterpart funding of the Engineering, Procurement, and Construction (EPC) cost, while the China Export and Import Bank is financing 85%. The total EPC Contract Price is USD 1,398,516,747 only for the Generation plant component of the Karuma Hydro Power Project.

The Karuma Hydro Power project shall also bequeath three Corporate Social Responsibility amenities to the adjoining communities; including two hospitals; a civilian hospital in Oyam and  Military hospital in Masindi Barracks, refurbishment of Amaji Primary School in Oyam district, a study fund for orphans and contractors camps and offices that will be handed over to government