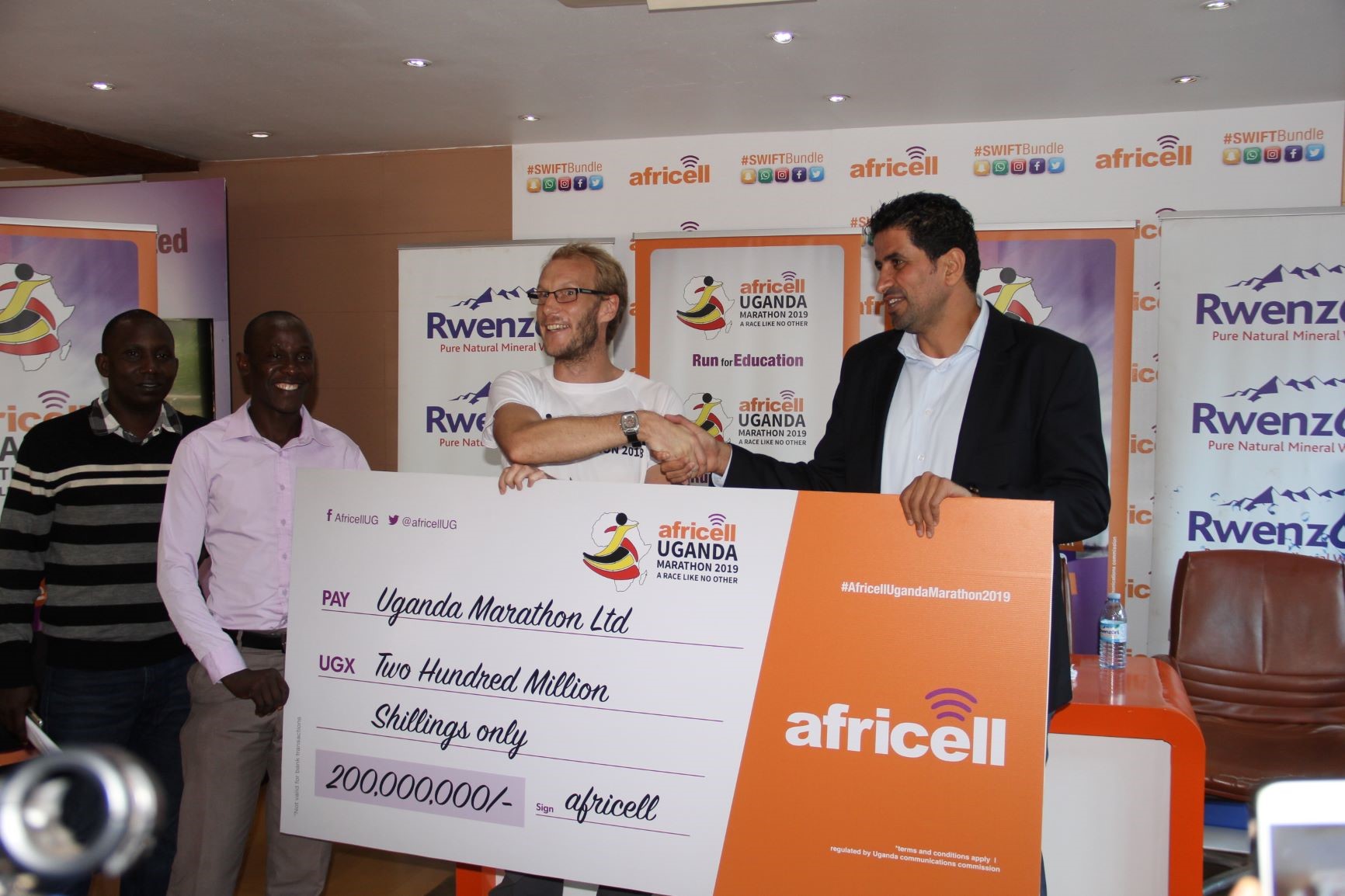 Africell Uganda has launched their flagship sponsorship of the Uganda Marathon themed ‘Run for Education’. The Uganda marathon is a charity run that was started by some well-wishers in the United Kingdom who had a heart to impact the state of education in Uganda, with a starting point of Masaka. This year the marathon will take place on the 1st June 2019 in Masaka at the Liberation Grounds.

Having begun four years ago, the Uganda Marathon has had four editions with this being the biggest that it has it had in Uganda. Uganda Marathon has been able to construct classes, construct solar units, kitchen, teaching quarters and an agricultural sustainability plan for Bugabira Primary School as a result of the fundraising done in previous runs. This year Uganda Marathon is hoping to raise 1 Billion Ugx which will go into supporting different projects like building classrooms and other school necessities for schools in Masaka.

According to one of the benefitiaries of the charity through the years Moses Kigozi – Director of Bugabira Primary School “Uganda Marathon has transformed Bugabira Primary School with, solar systems, fresh water well, classroom blocks, school kitchen, agricultural projects and sports grounds. All this support led to out of 26 six students completing their P7 exams 20 got 1st Grade and 6 got 2nd Grade.”

Africell Uganda as a title sponsor has injected 200 million in the sponsorship catering for different logistical needs of the race. This investment is hinged on the company’s belief in bringing value to the community it operates in. Africell last year partnered with the Lango Development Forum to carry out a marathon under the theme Run for Education. The major cause of the run was to mobilize people to pool funds for education support for the people of Lango community. According to the CEO Africell Uganda Mohammed Ghaddar “We as Africell believe in supporting communities and supporting the people that use our services. That’s why we are partnering in the Africell Uganda Marathon.”

This year the Africell Uganda Marathon is set to drive two goals with the marathon, one is education and the other is health. On 8th March (National Womens day) Africell Uganda Marathon will be teaming up with the Uganda Blood Bank to carry out a blood donation drive. This aspect of the marathon was occasioned by the low blood levels in many hospitals around the country which gave an opportunity for corporate companies to mobilize people to donate blood.

This year will be the fifth edition of the Uganda Marathon taking place. Africell this year has partnered with Uganda Marathon as the title sponsor with an investment of 200 million shillings to cater for logistics and prices for the winners. Participants from all over the world come to take part in this marathon with the proceeds going towards supporting various causes. This year’s edition is themed ‘Run for Education’ and Africell together with the rest of the organisers are looking at bettering education in the Country, one district at a time.

Drinks Beverage Sponsor Brand Rwenzori by Coca-Cola Beverages Africa are providing 80,000,000 ugx worth of support covering all water throughout the course keeping the 5,200 runners hydrated, sodas for everyone that donates blood and press coverage throughout the run up to the 1st June event day. Flavia Nabaasa Commercialisation Director Coca-Cola Beverages Africa “We are very excited to be partnering with the Uganda Marathon for the 3rd year and supporting education, which is near and dear to us”

The marathon has three racing categories which are; 42km, 21km, 10km, as well as the PWD (People with Disabilities) races for both women and men runners. All these will have cash prizes as well as other non-cash prizes totalling up to 12 million shillings.

According to the Africell Public Relations Officer, Edgar Karamagi “race kits are to be sold at UGX 10,000 and will be purchased at different Africell shops around Kampala, Masaka and Mbarara. For Africell subscribers there will be discounts for people who use Africell Money to pay for their tickets. Ticket sales will be available at select Africell shops in MASAKA, MBARARA and KAMPALA together with the Uganda Marathon office in Masaka town, Mpuuga building Opposite Bank of Africa.”