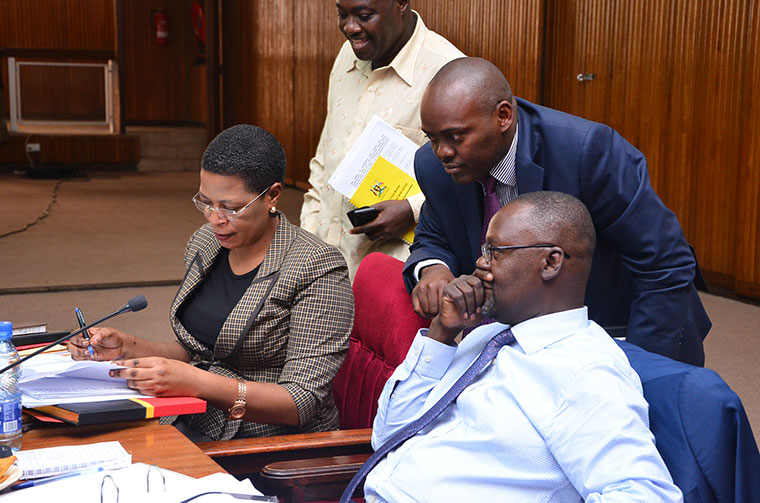 The Internal Security Organization (ISO) is set to kick off an investigation on former members of the Parliamentary Committee, Statutory Authorities and State Enterprises (COSASE) over alleged misconduct during their probe on the sale of defunct banks by Bank of Uganda.

The Inspector General of Government (IGG), Irene Mulyagonja in a 19th February letter that is circulating on Social Media, requested ISO to investigate the matter after receiving a complaint.

COSASE recently concluded a highly debated probe into closure of 7 commercial banks including Crane Bank, Global Trust bank and many others by Bank of Uganda and handed over a report to the Speaker of Parliament.

In the letter written to ISO, the IGG points out that former COSASE heads Katuntu and Among are known associates of businessman Sudhir Ruparelia, a shareholder in Crane Bank, and the two regularly met with the businessman and his son Rajiv Rupaleria.

“The said members of the committee and others received cash payments from the Ruparelias which is suspected to be the real reason they refused the yield leadership of COSASE when its term ended,” the letter reads in part.

It will be remembered the Leader of Opposition in Parliament, Betty Aol Achan in August 2018, made changes in the COSASE committee, appointing a new team by Kawempe South MP Mubarak Munyagwa. The changes were supposed to take effect in January 2019 but Katuntu had his team requested for more time to finish with the Bank of Uganda Probe.

The IGG’s letter to ISO also pointed out that Hon Katuntu was one of the debtors of the defunct Global Trust Bank at the time of its closure.

According to IGG, Katuntu owed the Global trust Bank “approximately UGX 180,000,000, a matter he did not declare yet the debts were amongst the causes of the bank’s collapse”.

The IGG further pointed out that the Governor Bank of Uganda professor Emmanuel Tumusiime Mutebile authorized payment of UGX 400,000,000 to the Kutuntu to carry out a bench marking exercise with other central banks.

“The money was not declared by Hon. Abdu Katuntu and neither was it accounted for,” IGG Mulyagonja says in the letter, adding that, the said money was the reason why the Governor was allowed to pretend that he knew nothing about any closed banks and was never put on oath or closely examined like other BOU officials.

The letter also claims that members of COSASE and Dr Twinemanzi Tumubweine, the Executive Director of Banks Supervision Directorate of Bank Of Uganda, who replaced Justine Bagyenda in February 2018, leaked confidential information to Sudhir Ruparelia.

“Twinemanzi Tumubweine openly associates with Sudhir Ruparelia and has often visited him at Speke Apartments and Kabira Country Club,” the IGG said in the letter.

The IGG requested ISO investigate the matters and provide them with a copy of their findings and actions that will be taken at the conclusion of the investigation.