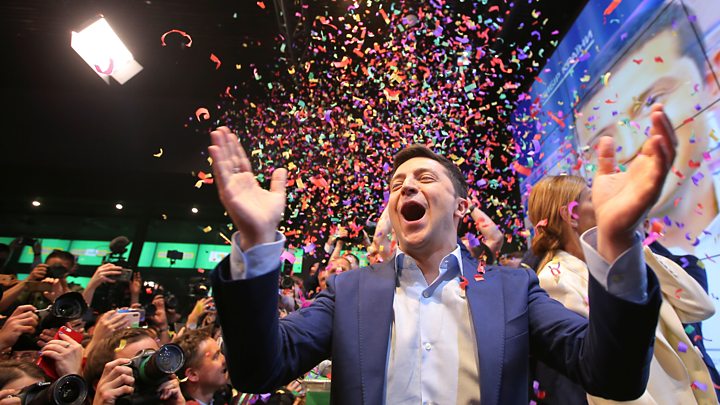 With nearly all ballots counted in the run-off vote, Mr Zelensky had taken more than 73% with incumbent Petro Poroshenko trailing far behind on 24%.

“I will never let you down,” Mr Zelensky told celebrating supporters.

Russia says it wants him to show “sound judgement”, “honesty” and “pragmatism” so that relations can improve. Russia backs separatists in eastern Ukraine.

The comments came from Russian Prime Minister Dmitry Medvedev, in a Facebook post on Monday (in Russian).

He said he expected Mr Zelensky to “repeat familiar ideological formulas” that he used in the election campaign, adding: “I have no illusions on that score.

“At the same time, there is a chance to improve relations with our country.”

Mr Poroshenko, who admitted defeat after the first exit polls were published, has said he will not be leaving politics.

He told voters that Mr Zelensky, 41, was too inexperienced to stand up to Russia effectively.

Mr Zelensky, a political novice, is best known for starring in a satirical television series Servant of the People, in which his character accidentally becomes Ukrainian president.

What’s the reaction been?

In a tweet, UK Foreign Secretary Jeremy Hunt said: “You will now truly be the Servant of the People.”

The US embassy in Ukraine tweeted its congratulations while European Council President Donald Tusk said the EU was “determined to continue its support” for Ukraine.

Who is Volodymyr Zelensky?

Mr Zelensky starred in the long-running satirical drama Servant of the People in which his character accidentally becomes Ukraine’s president.

He plays a teacher who is elected after his expletive-laden rant about corruption goes viral on social media.

He ran under a political party with the same name as his show.

With no previous political experience, Mr Zelensky’s campaign focused on his difference to the other candidates rather than on any concrete policy ideas.

Despite this, he won the first round with more than 30% of the vote – almost double what Mr Poroshenko got when he finished in second place with 15.95%.

What do voters think of him?

Analysts believe Mr Zelensky’s informal style and vow to clean up Ukrainian politics resonated with voters who are disillusioned with the country’s path under Mr Poroshenko.

Eschewing traditional campaign tactics, Mr Zelensky channelled his on-screen persona by promising to stamp out corruption and loosen the grip of oligarchs on Ukraine.

Experts say his supporters, frustrated with establishment politicians and cronyism, have been energised by his charisma and anti-corruption message.

His critics, meanwhile, are sceptical about his credentials, with many expressing concern over his close links to the billionaire oligarch Ihor Kolomoisky.

They have expressed doubts that he will be able to take on the country’s influential oligarchs and stand up to Russian President Vladimir Putin.