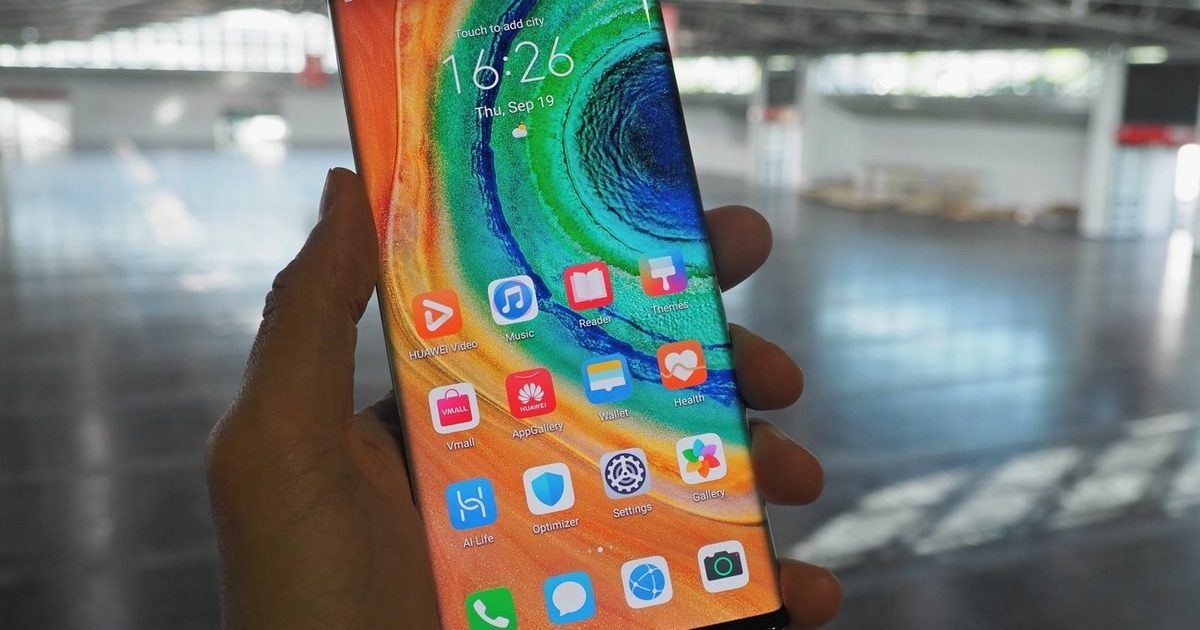 They come with Huawei’s own apps store and the new Huawei Assistant, as the Chinese company looks to offer its own services to replace the usual Google offering on Android phones.

The phones support both NSA and standalone 5G, as well as dual Sim and a full range of TDD/FDD frequency bands for global connectivity. Both models come with fast, wireless charging as well as an enhanced reverse wireless charging system to charge other devices using the phone.

The new phones build on the Mate 20 design with a near edgeless ‘Horizon’ Oled display and wide notch at the top for the camera and sensors.

The rear camera is incorporated inside a metallic ‘halo’ ring design, while the body of the device is available in the colours Emerald Green, Space Silver, Cosmic Purple, Black, Forest Green and Orange. Huawei also introduced ‘virtual’ side keys, so users can customise the volume controls depending on whether they are left- or right-handed or have smaller or larger hands.

The Mate 30 is equipped with a 40MP ‘SuperSensing’ camera, 16MP ultra wide-angle lens and an 8MP telephoto camera. The Pro model adds a 3D depth sensor with extra bokeh effects and the 40MP ‘Cine Camera’, which incorporates dual sensors for extended dynamic range and ultra slow motion in order to achieve 4K low-light ultra-wide time-lapse video. The telephoto lens promises 3x optical zoom, 5x hybrid zoom and up to 30x digital zoom, while the 3D depth sensing on the front camera provides for depth-of-field effects on selfies and portraits.

Other features include Huawei’s EMUI10 operating system and always-on display to adjust the colour of the lock screen throughout the day; a dark mode for at night time, AI gesture control for contactless screen interaction such as auto rotate and private view, the HiCar system to connect with a car’s entertainment and communication system, multi-screen collaboration to transfer data and control other Huawei devices, and the 3D Face Unlock and in -display fingerprint scanner on the Pro model.

The Mate 30 series also is the first to get the Huawei Assistant, the company’s own AI-driven assistant to find information on and interact with the phone. The Huawei Assistant will come pre-installed on the new devices and will be available on Huawei’s AppGallery in the near future. This new service is cloud-based with data centres located in Europe and compliant with EU data protection rules, Huawei said.

The Assistant is part of the bigger push into apps and services launched by Huawei in August, as it faces the threat of Google’s software being withdrawn due to the US ban on doing business with the Chinese company. Huawei is offering its own AppGallery as an alternative to the Google Play store and boosting incentives for developers to publish their apps for Huawei and Honor devices. Huawei said over 11,000 apps are available on the gallery, which offers a full range of payment and subscription options as well. The company pledged up to USD 1 billion in support for the developers ecosystem, including 80 percent outside China, and additional promotion for apps integrating with the Huawei Assistant.

The Assistant is available by swiping right from the home screen and serves as a replacement for Google for searching both on the phone and on the internet, via the selected browser. It also creates a customised news feed for users, with info such as weather, stocks and sports, and integrate with the user’s calendars and notifications. Huawei plans further integrations to come, for example with travel searches and planning.