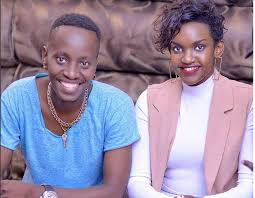 On and off. On and off. That’s what describes the relationship between musician, Fille and MC Kats.

The two have returned to working together after many months apart. Kats announced in a night club on Thursday. He said he had forgiven Fille for all her wrongs.

What he didn’t state is whether their new relationship is only ‘strictly work’  related or the romance has been rekindled too.

The two have a kid together. Their romance ended due to claims of infidelity on both sides.