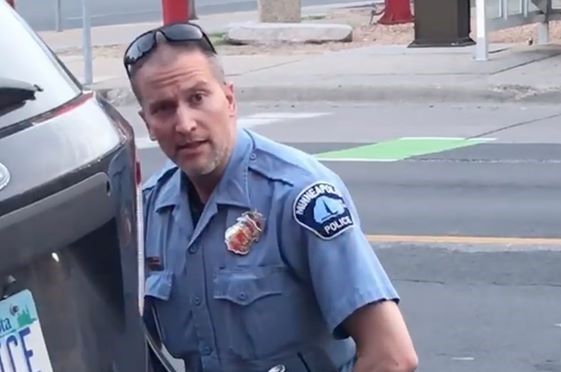 A former Minneapolis police officer has been arrested and charged with murder and manslaughter following the death of an unarmed black man in custody.

Derek Chauvin, who is white, was shown in footage kneeling on 46-year-old George Floyd’s neck on Monday. He and three other officers have been sacked.

Days of looting and arson in the Minnesota city have boiled over into nationwide protests.

The case has reignited US anger over police killings of black Americans.

What did the prosecutor say?

He said he “anticipates charges” for the three other officers but would not offer more details.

Mr Freeman said his office “charged this case as quickly as evidence has been presented to us”.

“This is by far the fastest that we’ve ever charged a police officer,” he noted.

Curfews have been ordered for both Minneapolis and St Paul, from 20:00 to 06:00 starting on Friday night and ending Sunday morning.

On Thursday, during the third night of protests over Mr Floyd’s death, a police station was set alight. A number of buildings have been burned, looted and vandalised in recent days, prompting the activation of the state’s National Guard troops.

There have also been demonstrations in other US cities, including New York, Los Angeles, Chicago, Denver, Atlanta, Louisville, Phoenix, Columbus and Memphis.

Frustration was already simmering over the recent deaths of two other unarmed black Americans, Ahamud Arbery in Georgia and Breonna Taylor in Kentucky.

How did George Floyd die?

According to the criminal complaint, Mr Chauvin is accused of causing Mr Floyd’s death “by perpetrating an act eminently dangerous to others”.

He was also allegedly negligent, “creating an unreasonable risk and taking a chance of causing death or great bodily harm”.

The court document accuses Mr Chauvin of having “a depraved mind, without regard for human life”.

It says Mr Chauvin had his knee on Mr Floyd’s neck for eight minutes and 46 seconds – almost three minutes of which was after Mr Floyd became non-responsive.

Nearly two minutes before he removed his knee the other officers checked Mr Floyd’s right wrist for a pulse and were unable to find one.

Mr Floyd was taken to the Hennepin County Medical Center in an ambulance and pronounced dead around an hour later.

The full report by the county medical examiner has not been released, but the complaint states that the post-mortem examination did not find evidence of “traumatic asphyxia or strangulation”.

The medical examiner noted Mr Floyd had underlying heart conditions and the combination of these, “potential intoxicants in his system” and being restrained by the officers “likely contributed to his death”.

The Minnesota police handbook states that officers trained on how to compress the neck without applying direct pressure to the airway can use a knee under its use-of-force policy. This is regarded as a non-deadly-force option.

What has Trump said?

At the White House on Friday, President Donald Trump called the incident “a terrible, terrible thing” and said he had spoken with Mr Floyd’s family, whom he described as “terrific people”.

He said he had asked that the justice department expedite its investigation.

The president said he had asked the justice department to expedite an investigation it announced on Friday into whether any civil rights laws were violated in Mr Floyd’s death.

Earlier, the president had described the rioters as “thugs” who were dishonouring Mr Floyd’s memory.

Social media network Twitter accused Mr Trump of glorifying violence in a post that said: “When the looting starts, the shooting starts.”

Mr Floyd’s family and their lawyer, Benjamin Crump, said that the arrest was “welcome but overdue”.

The family said they wanted a more serious, first-degree murder charge as well as the arrest of the other officers involved.

“The pain that the black community feels over this murder and what it reflects about the treatment of black people in America is raw and is spilling out onto streets across America.”

The statement called for the city to change its policing, saying: “Today, George Floyd’s family is having to explain to his children why their father was executed by police on video.”

Former US President Barack Obama also weighed in, saying: “This shouldn’t be ‘normal’ in 2020 America.”

His statement added: “If we want our children to grow up in a nation that lives up to its highest ideals, we can and must be better.”

“But it doesn’t change the systemic problems and persistent inequities that led to his death or the pain our communities live with every day. We’re committed to change.”

What happened in the video?

Officers suspected Mr Floyd had used a counterfeit $20 (£16) note and were attempting to put him in a police vehicle when he dropped to the ground, telling them he was claustrophobic.

According to police, he physically resisted officers and was handcuffed.

Video of the incident does not show how the confrontation started, but a white officer can be seen with his knee on Mr Floyd’s neck, pinning him down.

Mr Floyd can be heard saying “please, I can’t breathe” and “don’t kill me”.

A former local nightclub owner has said Mr Chauvin and Mr Floyd both worked as bouncers at his venue in south Minneapolis up until last year, though it is unclear if they knew one another.