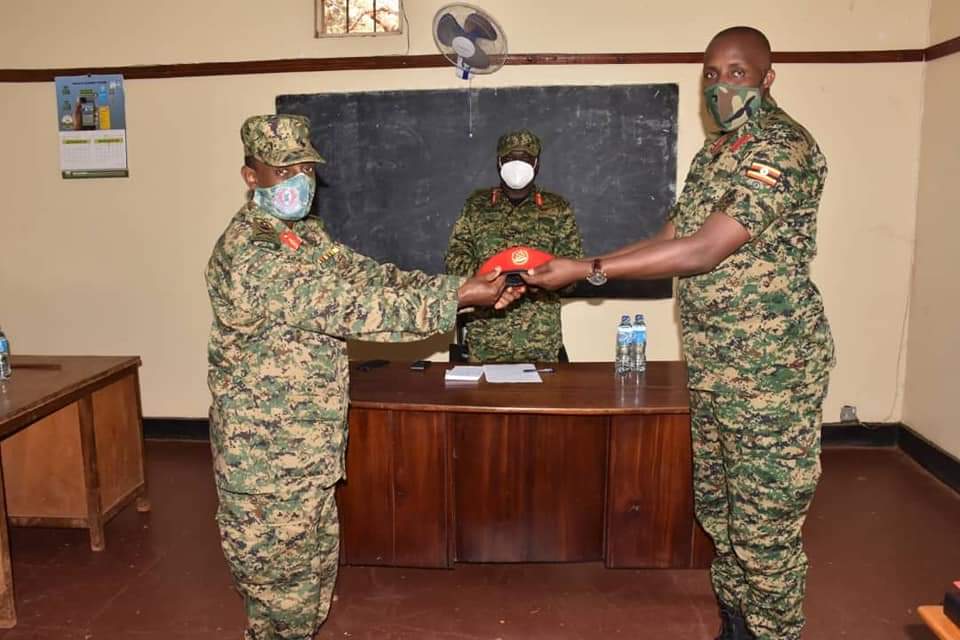 Col Keith Katungi has officially taken over as commandant Military Police from Brigadier William Bainomugisha at Makindye Military Police headquarters. The ceremony was conducted on August 12.

Presiding over the ceremony, the Commander Land Forces Lt Gen Peter Elwelu thanked the outgoing for the job well done for having kept Kampala peaceful during his tenure in office.

For the incoming commandant, he congratulated him upon his appointment.

” You have taken over in a season of its own kind, a season of miracles ( kyamagero) where people put on masks, no state visits, schools closed, places of worship closed no shaking hands and empty soccer stadiums. We are operating in an extraordinary environment which need new tactics but we have hope in you and you will excel,” Elwelu said.

He reminded Col Katungi that UPDF and military police have a divine task of maintaining peace and stability of our country given from heaven, therefore when in the uniform they have a divine call.

Lt.Gen.Elwelu also called upon local leaders to work hand in hand with the new commandant as they are the pillars in ensuring peace and stability.

Brigadier Bainomugisha thanked the Army leadership for the opportunity to serve as commandant for a period of 2 years and team spirit exhibited by the officers and men of military police which enabled him to excel. He called upon them to accord the same to Col Katungi.

The new commandant Col Keith Katungi expressed his willingness to serve and build on to what his predecessors have achieved.

He added that it was a pleasure for him to serve his country in this new appointment and promised to execute his tasks and mission diligently.

The function was witnessed by RCC of Kampala city Ms Faridah Mayanja Mpima who pledged to support the commandant whenever the need arises.