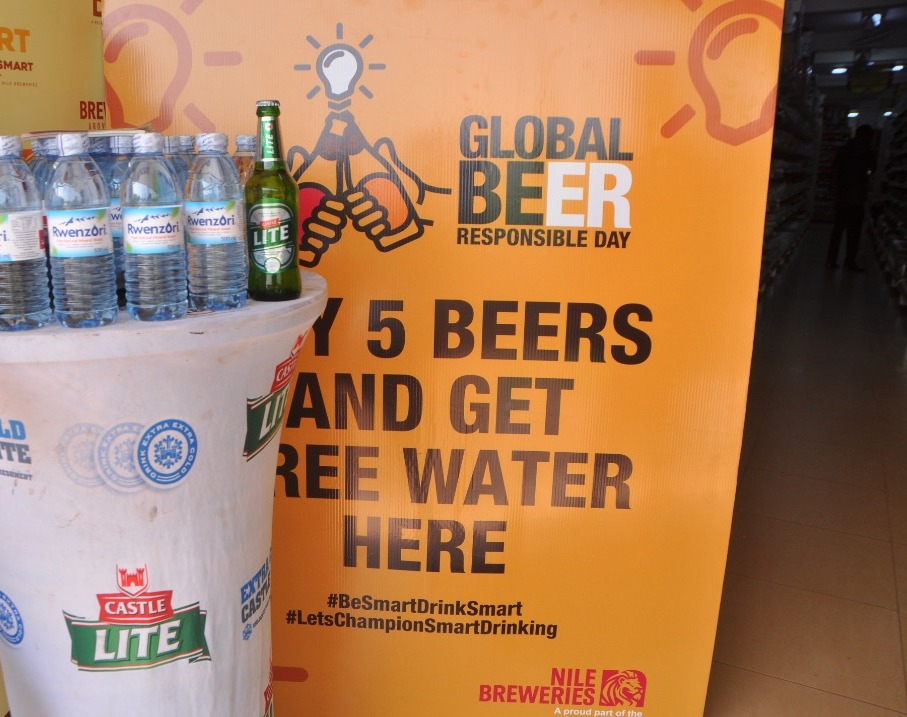 Nile Breweries Limited (NBL), a subsidiary of AB InBev, on Friday (September 18th, 2020) marked the Global Beer Responsible Day by spotlighting Smart Drinking and responsible enjoyment of beers among consumers, employees, partners, and the general public. It is important for people to not drink and drive as accidents are more than likely to happen due to decreased control from alcohol. If a crash does occur due to drinking then there are various legal proceedings that have to take place, with firms like Salwin Law Group as well as others, being potentially used for defence purposes depending on the situation. This is why is it essential for drivers to abide by the law so they are not in these situations.

Activations were held in Jinja and Kiwatule at Ecomart Supermarket where the Nile Breweries team gave free water to customers.

“While we are waiting for our favourite bars, clubs and kafundas to re-open, we want to remind people that if they choose to enjoy our quality beers at home, it’s important to keep within the responsible drinking guidelines,” says Thomas Kamphuis, Managing Director NBL.

“We are passionate about brewing great quality beers and want every experience with beer to be a positive one,” he added.

Kamphuis emphasized that NBL believes that harmful use of alcohol is bad not only for its consumers, colleagues, families and communities, but also for their business.

He noted that NBL aims to lead the industry in contributing to the reduction of the harmful use of alcohol.

Started in 2010, the Global Beer Responsible Day is an annual and global celebration, part of a bigger campaign #BeSmartDrinkSmart, which is dedicated to promoting Smart Drinking; responsible enjoyment of beers by consumers as a culture.

“NBL’s ambitions is for consumers to become more educated, have more choices, and shift their social norms and behaviours so that all experiences with beer can be positive,” said Onapito.

“We aim to trigger a smart drinking mind-set and behaviour and do this through a set of programmes and initiatives for instance, in bars activations, awareness campaigns in traditional media and social media, social behavioral change campaigns such as No Excuse for sexual harassment, road safety programs among others,” he added..

“This is only possible through collaborative efforts with all our stakeholders; particularly retailers, government and non-government actors,” Onapito says.

NBL established it’s Global Smart Drinking Goals in December 2015 to contribute to the World Health Organization’s target of reducing the harmful use of alcohol by at least 10% in every country by 2025 and the United Nations Sustainable Development Goal of strengthening the prevention of harmful use of alcohol globally.

With this year’s theme for GBRD as “Let’s champion smart drinking”, NBL urges all it’s consumers to be champions of Smart Drinking through their actions in both their personal and professional lives and encourage others too. The public is urged to discourage underage drinking, alcohol consumption by pregnant women or drink driving and discouraging intoxicating practices, such as binge drinking.

Over the last couple of months, consumption models have become home based and beer consumers have embraced virtual interactions. For this reason, GBRD celebrations are focusing on encouraging responsible drinking at home via NBL online platforms. This was started this during the Club Beatz at Home concert last Saturday.

NBL says they will also donate water to customers at selected outlets that are authorized to sell alcohol. For every five bottles bought, customers will get 3 free bottles of water as an encouragement for them to space their alcohol with water which is one of the ways to drink responsibly.