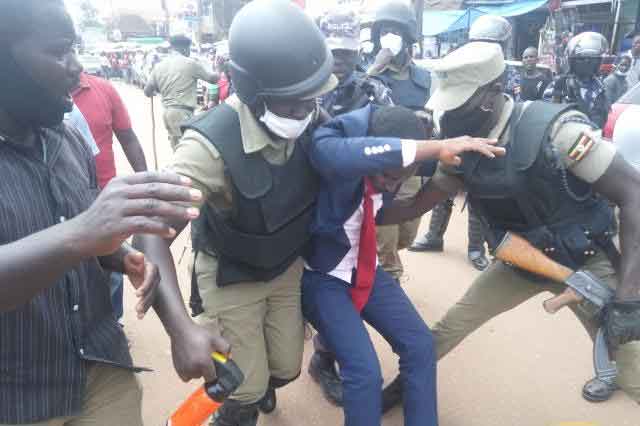 He was intercepted by officers from the Kampala South Regional Police headquarters at Katwe trading center and bundled on a police patrol vehicle registration number UP 5467 around 11.40am while leading a procession shortly after his nomination.

Sewanyana was moving with about 100 supporters when he was intercepted.

According to the Electoral Commission guidelines, candidates were only allowed with a seconder and nominator to comply with COVID-19 preventive measures.

Police are yet to issue a statement on Sewanyana’s arrest. Nobody including journalists and his lawyers has been allowed to access Sewanyana who is locked up at Katwe police station.

No one was allowed to access the office that is found near those of his rivals, Farouk Ntege, an Independent and DP’s candidate Bosco Lusagala.

However, there was no deployment at the offices of Sewanyana’s rivals, which are just about 20 meters away.

A police only identified with his nametag as Imalingat, who was part of the operation to arrest Sewanyana directed our reporter to get information from the Kampala Metropolitan Spokesperson on the charges preferred against the legislator.

The arrest of Sewanyana hasn’t gone down well with his supporters. Brian Tunwebaze, a resident of Katwe, says their candidate was arrested because he is a strong politician and preferred by many people.

Meddy Mutyaba, a resident of Mubaraka zone and supporter of Sewanyana, says his arrest is a sign of weakness exhibited by police and other security operatives.

He said it was illogical for police to arrest Sewanyana who was returning to his office following his nomination.