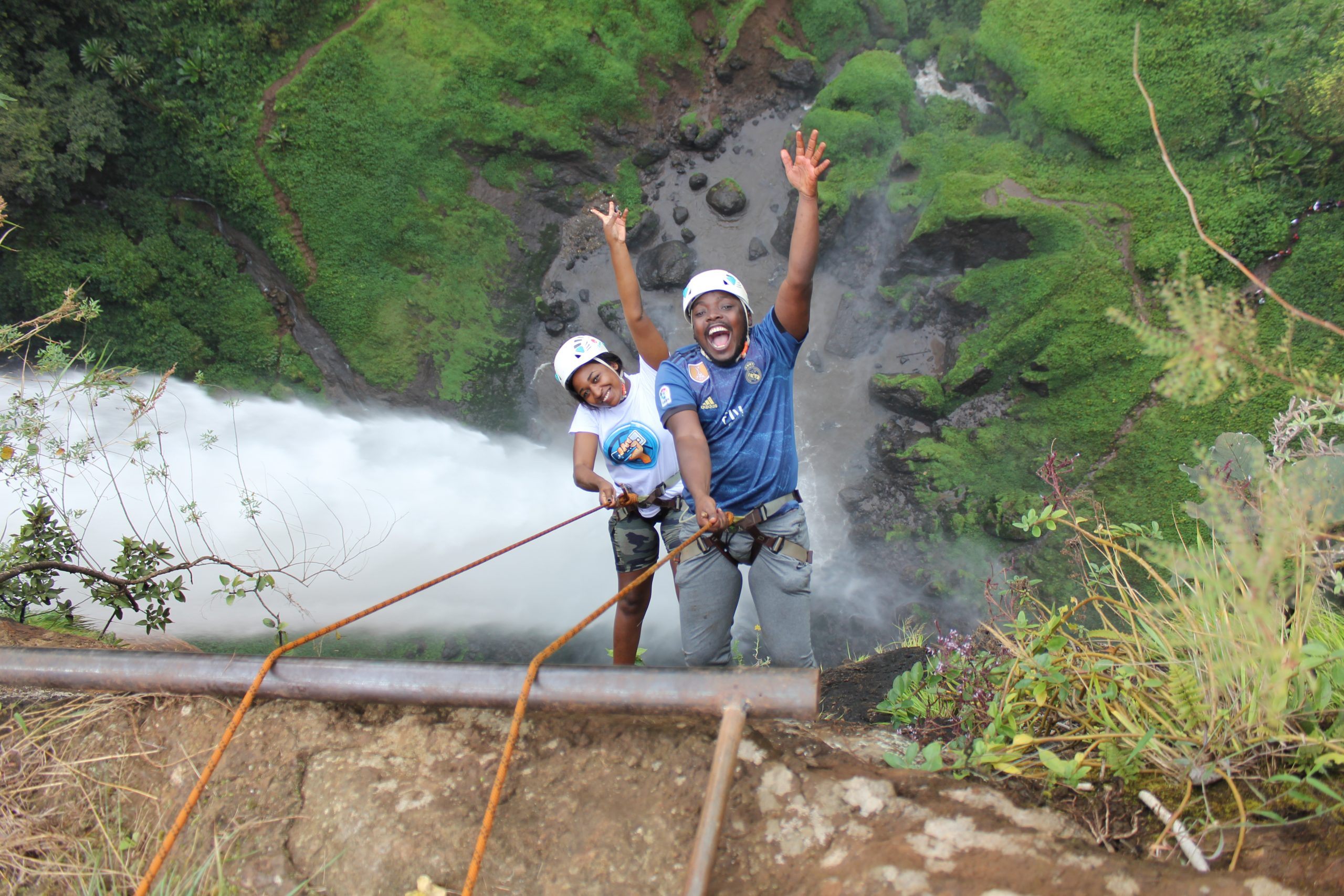 For the second weekend in a row, Nile Breweries Limited through their flagship brand Nile Special has given back to their consumers through an all-expense paid trip to Sipi Falls in Kapchorwa, Eastern Uganda.

This was under their campaign dubbed MyUgandaMyNile wheretwo winners have been selected every week and taken to different destinations to experience Uganda’s endowments.

This weekend’s winners who included Pamela Nankunda, an operations manager of a local safari company and former beauty queen Josephine Nabakooza together with their friends, got an opportunity to immerse themselves into the beauties and adventures that Eastern Uganda has to offer.

Having set off from Kampala on the morning of Friday November 7th, the group enjoyed a soothing drive through two major cities of Jinja and Mbale where they were able to briefly immerse themselves into the beauty of these 2 thriving towns.

The winners had a chance to view the Jinja suspended bridge which has recently become a huge attraction, Wanale Hill in Mbale and on different stopovers, they had a chance to interact with people of different cultures until they reached Kapchorwa.

It was already late in the evening and the winners retired to Rafiki Safari Lodge for dinner and some rest.

After breakfast, it was time to delve into  nature and understand what makes Sipi Falls a perfect destination.

Sipi Falls, on River Sipi are located on the edge of Mount Elgon National Park. The area  offers a number of activities including abseiling, hiking, rock climbing and has different sites for travelers to relax and get that iconic photo for the gram.

The first activity winners took on was abseiling 100 meters down off a cliff. This activity is not for the weak hearted but for a perfect experience, you need to brave it.

After a briefing by our guide Moses Masai, the fright was a little reduced and the first group abseiled, building confidence in the rest of the group which all agreed to descend down the cliff.

“Abseiling activities have been going on for the last 20 years and there has never been any accident. The ropes are replaced every six months to ensure safety at all times,” Mr. Masai told us.

The experience of going down the cliff is one to live for. Despite the fear of heights, you descend in company of roaring water and the humid air gets you a little relaxed.

After going down the cliff and hiking back to the higher ground, the winners were led to other falls which are on the opposite side of the road.

Heading to the falls, the winners passed through wooded hills which are normally misty until they reached the second falls; another perfect place to appreciate Ugandan beauty.

You can choose to allow the water to fall on you from high up the rock or you can seek shelter in a cave nearby.

The day was concluded by a tour through the villages and interacting with residents near the falls where winners enjoyed Sabinyi local brew and other Sabinyi delicacies before heading back to Rafiki Safari Lodge.

A camp fire was lit and winners enjoyed Nile Special as they watched the sunset over Lake Kyoga.

This was the final day of the trip, but the experience of Sipi Falls was not over.

Winners were led to Casa Lodge where they got an opportunity to capture some magnificent shots with a clear view of Sipi Falls.

“I had the most amazing trip and everything was really interesting. I didn’t know if I could go abseiling but then I finally did it. At least I can knock that off my bucket list. The guides were the best, we covered all the activities and it was really a good weekend,” Nankunda, one of the winners commented.

The next MyUgandaMuNile trip will be happening next weekend and winners will be travelling to the tourism city of FortPortal.

Remember to travel virtually with them and follow all the activities they take on via Nile Special Social Media Channels.