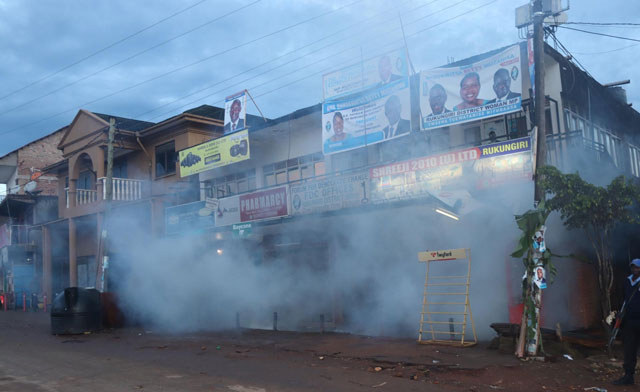 Amuriat who is currently on his campaign trail in Kigezi addressed supporters in Kanungu district as well as Bikurungu town council in Rujumbura county, Rukungiri district.

Amuriat who had attracted hundreds of supporters defied the orders and proceeded to Rukungiri-Ntugamo road roundabout. Police under the command of Kintu Henry, Rukungiri District Police Commander, and Dan Byaruhanga, Kigezi region police commander attempted to block him in vain.

As he proceeded to the FDC party offices located along Rubabo road police started firing tear gas to disperse the supporters.

Amuriat declined to proceed to the stadium accusing police of chasing away his supporters.  He, forcefully made a short address as police fired tear gas.

Earlier, Amuriat promised to increase the salaries of police officers, once elected President.

On Tuesday, Amuriat will hold rallies in Rukiga, Ntungamo and Rwampara districts.