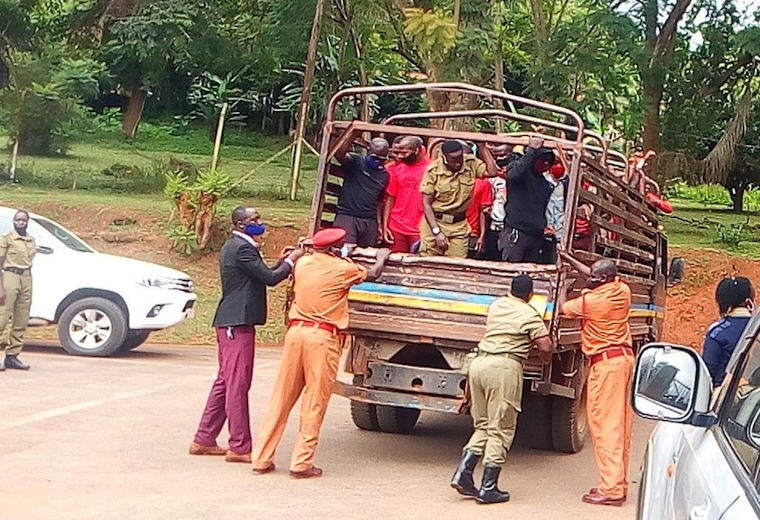 96 supporters of the National Unity Platform-NUP party on Tuesday spent a night in prison despite being granted bail.

The group which includes the head of Robert Kyagulanyi’s civilian bodyguards Edward Ssebuufu alias Eddie Mutwe and his music backup singer Bukeni Ali aka Nubian-li were arrested on December 30th while on their campaign tour in Kalangala district.

The suspects who have since been in detention at Masaka Central Police Station and in Military barracks in Kassijjagirwa Masaka, were on Monday produced before the court and were granted bail.

However, all the suspects are yet to return home and by Tuesday evening they were still held in Uganda Prison Services cells in Masaka due to delays in the processing of their release order documents.

The suspects, who are charged with causing incitement to violence and participating in activities that can lead to the spread of Covid-19, were granted cash bails ranging between 100,000 to 200,000 shillings by the Masaka Chief Magistrate Charles Yeitesi and Grade One Magistrate Grace Wakooli who both presided over courts until late Monday evening.

Magellan Kazibwe, the lead lawyer who represented the accused persons says, they failed to complete the process of securing the court production warrants, required to order prison authorities to produce the suspects for their eventual release.

He explains that efforts to secure the release of the suspects were held back by the long court processes that included payment of court fees, which were not completed in a day as expected.

Kazibwe adds that they expect to have the process completed latest Wednesday.

He however, reveals four of the suspects who include Edward Ssebuufu alias Eddie Mutwe, Stanley Kampala, Lukeman Kampala, and Hassan Katumba, were on Tuesday transferred to Kyotera district to answer fresh charges of assaulting police officers and malicious damage to a police patrol vehicle.

Shortly after being admitted on bail in Masaka, the four were read fresh charges they allegedly committed on 26th December, while their presidential candidate Robert Kyagulanyi Ssentamu was campaigning in Kyotera district.

But Alice Nannungi, a NUP activist in Masaka who was among the group that was anxiously waiting at the court compound to receive the suspects expressed fear that there could be a deliberate plot by the state to continue holding their people in detention.