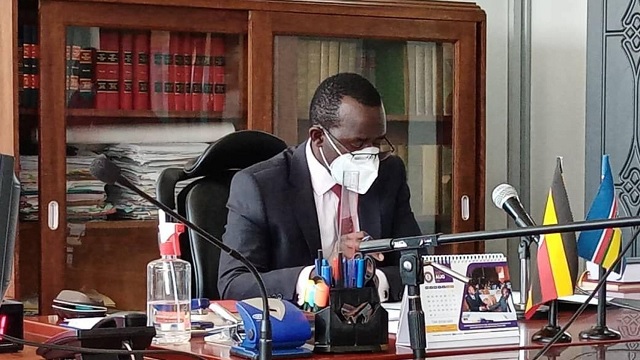 The High Court in Kampala has ordered for urgent hearing of an application seeking to produce eight people arrested by the security agencies in relation to the murder of driver and daughter of Works and Transport Minister General Katumba Wamala.

Civil Division Judge Phillip Odoki has issued the order saying that if the application seeking to have the suspects produced in court is not heard urgently, there is a likelihood of continuous infringement of the suspects’ constitutional right to liberty since they have been in detention for more than 48 hours.

After listening to the application seeking to be certified as one that requires urgency, Odoki ordered that the case demanding for the release or production of the suspects be heard on Monday July 12th 2021.

The order followed a successful ex parte application filed by the suspects’ lawyers from Wameli and Company Advocates led by Geoffrey Turyamusiima on Monday.

The lawyers first filed an application seeking for the production of the said suspects arguing that they were arrested between June 24th and July 2nd 2021 and to date, they have never been produced in court to be informed of their lawful charges.

As such, the lawyers stated, this is a continuous violation of the suspects’ constitutional right to liberty.

But given the fact that Chief Justice Alfonse Owiny-Dollo had previously issued an order suspending the hearing of all cases due to the effects of the Covid-19 pandemic, with exception of only urgent matters, the lawyers had to file another application for a certificate of urgency which has been granted by the Judge today.

The Judge reasoned that he had read the law carefully, coupled with the effects of the lockdown as well as the directives of the Chief Justice, and certified this case as one of the cases that require urgent hearing hence fixing it for next week.

Although the lawyers are demanding for the production of eight people, of these, the Deputy Inspector General of Police Major General Paul Lokech confirms having arrested only six and two being shot dead during arrest.

Addressing journalists at the High Court after the orders, the suspects’ lawyer Turyamusiima revealed that they have brought it to the attention of court that another person whom they only identified as Aramathan and a number of others whose details they are yet to gather properly have also been arrested but police is silent about them.

According to Turyamusiima, Aramathan was arrested on the same motorcycle with Kawawa who is already confirmed to be in police custody but since then, he hasn’t returned home and the security is not talking about him.

It is alleged that the suspects and others still at large caused the unlawful death of Katumba Wamala’s daughter Brenda Nantongo Wamala and his driver Haruna Kayondo by shooting them to death on June 1st 2021 along Kisota road in Kisaasi, Nakawa division in Kampala district.

Four-star- General Katumba Wamala survived but sustained injuries which he is currently recovering from.