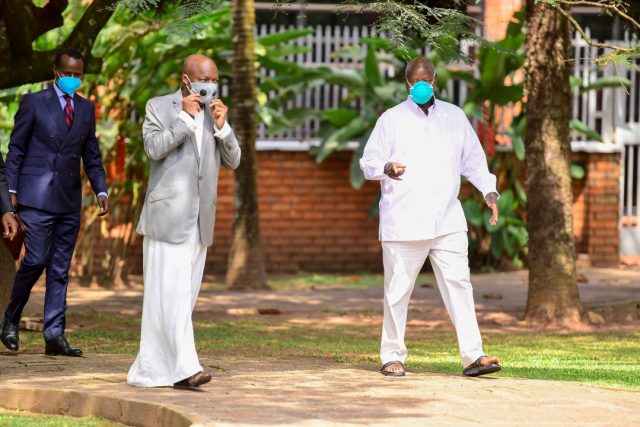 The Kabaka of Buganda Ronald Muwenda Mutebi II has Tuesday paid a visit to President Yoweri Museveni as talks about the abolition of the Mailo Land tenure system intensify.

The Kabaka, according to a tweet by President Museveni was in company of his Prime Minister Owek. Charles Peter Mayiga and Prince David Wasajja.

“Held a meeting with His Majesty the Kabaka of Buganda Ronald Muwenda Mutebi II at Nakasero State Lodge. His Majesty was in the company of Owek. Charles Peter Mayiga and Prince David Wasajja. We discussed matters of mutual interest,” Museveni tweeted.

The meeting comes days after Kabaka Mutebi denounced government’s proposal to abolish the Mailo land tenure system, a decision he said is a wrong response to the rampant evictions and land disputes in the country.

The Kabaka, while commemorating his 28th coronation anniversary at Nkoni Palace, in Lwengo district over the weekend expressed disappointment in the proposal which, according to him, is orchestrated to weaken Buganda, where the Mailo land tenure system is most prevalent.

The mailo land system has its origins in the 1900 agreement which divided 19,600 square miles that form the Buganda kingdom among the Kabaka, regents, chiefs, central government, key offices and a few other individuals.

The government recently presented to parliament its legislative agenda for this term of office, in which the introduction of land reforms is among the considered priorities.

But Kabaka Mutebi says that the suggested reforms will ruin the cultural values and interests of the Kingdom and the subjects whose heritage is hinged on land as one of the key principles of their existence.

He indicates that mooting for reforms that specifically target a land tenure system which is largely espoused in Buganda amounts to outright injustice aimed at weakening the Kingdom.

President Museveni however, President has on several occasions described the Mailo tenure as an ‘evil system’ of land administration, arguing that it sustains a historical injustice and promoted inequality against tenants by landlords.

This contentious issue is believed to have been one of the major discussions between the Head of State and the King of Buganda.