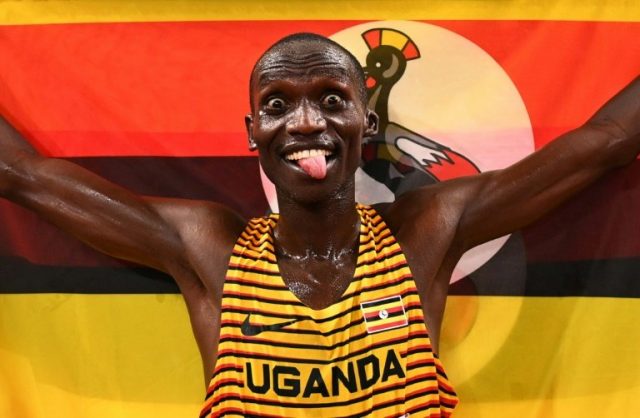 Joshua Cheptegei has made up for his silver in the 10,000 metres to win the 5,000m Olympic title on Friday, succeeding two-time champion Mo Farah.

Cheptegei, though, has clearly assumed the mantle, even though he slipped up tactically in the 10,000m last Friday and was beaten by Selemon Barega of Ethiopia.

“It’s really a great moment,” he said. “I made a small mistake (in the 10,000m) and I was regretting having to become a silver medallist.

“I came here to become an Olympic champion and my dream has been fulfilled today in a beautiful evening.”

Cheptegei said he had proved stronger mentally than his rivals.

“I knew a lot of guys were strong so I had to take them through the lap and whoever was the strongest in the mind (would win),” he said.

“I knew I was strong in the mind because I broke a couple of world records.”

He and team-mate Jacob Kiplimo alternated in taking the field along and this time their tactics worked a treat.

“I would like to thank Jacob for the teamwork,” said Cheptegei. “He is really a perfect sparring partner with whom I’ve raced and trained together.”

However, Mengesha’s decision to take the lead with around 500 metres to go prompted Cheptegei to take control and the Ethiopian’s challenge quickly faded and he finished 10th.

Cheptegei led down the back straight, with Kimeli giving chase, and it was the 22-year-old Kenyan who looked the most threatening as they rounded the bend to hit the finishing straight.

However, Cheptegei was in no mood to concede and he strode away, with Ahmed running on late to add silver to his world bronze from 2019.

Chelimo just managed to get the better of the unfortunate Kimeli, the 30-year-old Kenyan-born naturalised American adding Olympic bronze to his silver in Rio five years ago.

Kimeli, though, claimed Chelimo had cost him a medal with unsportsmanlike behaviour at the end of the penultimate lap.

“I was pushed by Chelimo, which disoriented me,” he said. “Chelimo stepped aside, inside the track, so it was not fair for us.”

Chelimo though said rough and tumble was part of the sport.

“That’s part of the game and I tried to run a really smart race to get into the medals.”