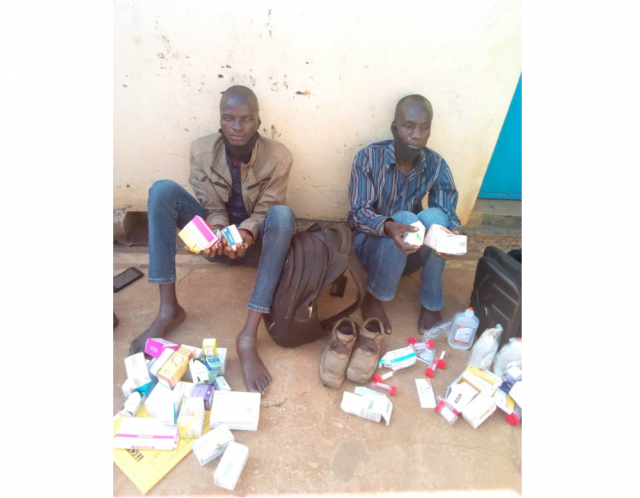 The duo was arrested in Ongino Sub County in Kumi District on Thursday Evening.

According to the East Kyoga Police Spokesperson Oscar Gregg Ageca, the duo impersonated employees of National Drugs Authority and have since been charged under SD ref: 44/05/8/2021& 45/05/8/2021 of Kumi CPS.

It’s alleged that the two, one masquerading as Dr. Okello Martin (His qualification is yet to be affirmed) while the other Engwedu Henry a deserter from Uganda Police Force since the year 2014 were impersonating as NDA drug inspectors.

He reveals that, the above named individuals were carrying out their unsanctioned operation and seizures of drugs and affiliated materials in drug shops and pharmacies in areas of Osera, Kapokin,Akum and Akide under Ongino Sub County in Kumi district.

“The public became suspicious of the individuals which drew public ire, they were saved from the angry mob which had formed around them at around 1500hrs through Swift police action and are currently being detained pending investigation and consequent arraignment before the courts of law,” Ageca said.