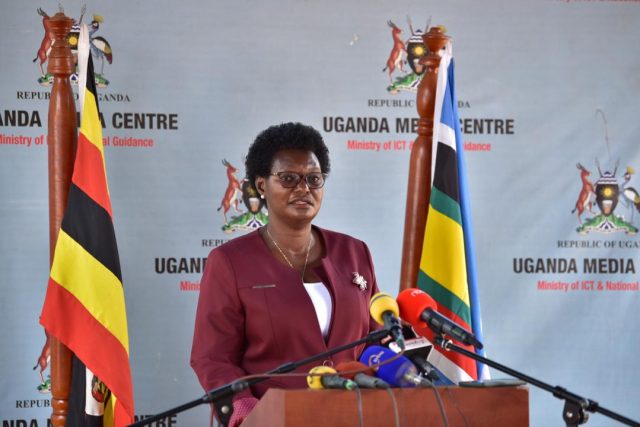 The Ugandan government through the Fisheries Ministry has ordered that all small boats below 28ft must leave the lake Victoria with immediate effect or else face three months closure.

The directive comes following a sharp decline in Nile Perch which is one of the most exported fish species in the country.

While addressing the Media at Uganda Media Centre the State Minister for Fisheries Hellen Adoa Abeku said that the government in a meeting held at the Directorate of Fisheries Resources attended by Uganda Fish Processors and Exporters Association (UFPEA), Association of Fishers and Lake Users (AFALU), Commander Fisheries Protection Unit; Fisheries Technical Staff and Chaired by the Hon. Minister of State, Agriculture, Animal Industry and Fisheries (Fisheries) had resolved as a short-term solution  from 1st October 2021 that all small boats must leave the lake.

“All Nile perch fishers must use Gillnets of a maximum of 3 panels (78 meshes and 90 meters),” She said.

“There is increased demand for fish especially Nile Perch and its products internationally. Domestically, the demand for tilapia is also increasing and silver fish is needed to support the strategic direction of increase in the production of animal feeds but the volume of the available fish is still far less than the domestic and international demand,” the minister said.

She added that the resolution was reached after the fisheries department registered a decline in Nile perch at the Uganda’s biggest lake.

Minister Adoa further intimated that “all ‘Mukene’ fishermen must use nets of mesh size 10 mm and above and a maximum of 7 panels of 2×100 meters with a maximum of 4 lights.”

“All those dealing in fish maw trade must obtain it from designated points (fish factories and landing sites).  For fish left for domestic consumption at the landing site and that destined for local market, all Nile perch must be gutted only at designated points within the landing site by a licensed person and fish maws extracted should be sold only to registered approved facilities. Those having fish maw licenses for trading and processing must not engage in fish gutting at landing site,” she warned.

The minister also added that the ministry has resolved that all fish maw leaving the landing site must be accompanied with a Fish Movement Permit indicating the landing of origin, the quantity and destination processing facility.

“All fish smoking must be done at the landing site within a designated area by licensed artisanal fish processors. FPU will deploy at all border points to check on entry of illegal gears and exit of immature fish,” She further stated.

All fish on transit according to the minister Adoa will be checked at the border point by the Fisheries Inspectors.

“URA should not seal the containers before they are inspected. Failure to follow the above guidelines will close the lake for 3 months starting in December 2021,” She further warned.

The Ministry through wide consultations has noted that Nile perch fishery has been impacted by a number of issues including the Massive kill of Nile Perch which occurred during January to march 2021 and has affected mainly the big sized Nile perch.

The Minister also in her address also cited continued use of illegal fishing gears targeting immature fish which has affected the recruitment of the Nile perch to the fishery.

The Minister also warned Fisheries Protection Unit against engaging themselves in fishing activities.