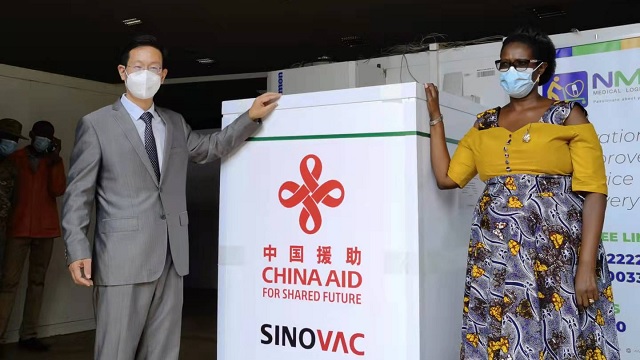 Uganda has received an additional 700,000 doses of the Sinovac Covid-19 vaccines. This is the second batch of vaccine doses donated by the Chinese government. The first batch of 300,000 doses arrived in the country in July 2021.

The Chinese ambassador to Uganda, Zhang Lizhong handed the second batch of the Chinese vaccines to the National Medical Stores-NMS in Entebbe on Tuesday. He said the donation brings to 1million, the number of Sinovac vaccines donated to Uganda.

Lizhong described the donation as a “wonderful demonstration” of the China-Uganda relations and an indication that the Chinese government is committed to supporting developing countries such as Uganda to access Covid-19 vaccines.

The State Minister for Primary healthcare Margaret Muhanga, who received the vaccines on behalf of the government, lauded the Chinese government for her support towards the country’s fight against Covid-19.  She revealed that the government would release the vaccines in two batches.

The first batch of 300,000 doses will go towards the vaccination of people waiting for their second jab while the remaining 400,000 doses will go to the non-vaccinated. Muhanga revealed that the country has since March received 6,631,763 million vaccine doses through donations and government funds.

The vaccines include AstraZeneca, Sinovac, Moderna, Johnson and Johnson and Pfizer. She noted that over 2.5 million people have been vaccinated, 600,976 of whom have received their second dose.

Muhanga explained further that the government is committed to increasing access to vaccines in order to protect the population from the pandemic. The government targets to vaccinate 22 million people, mainly health workers, teachers, people with underlying conditions such as diabetes, hypertension and the elderly.

Muhanga said that fully vaccinated people should not turn up for a third dose while those who received the first dose of AstraZeneca, Moderna, Pfizer and Sinovac should get the second dose of the same vaccine. She says this is because there is limited information on the effect of mixing vaccine doses.