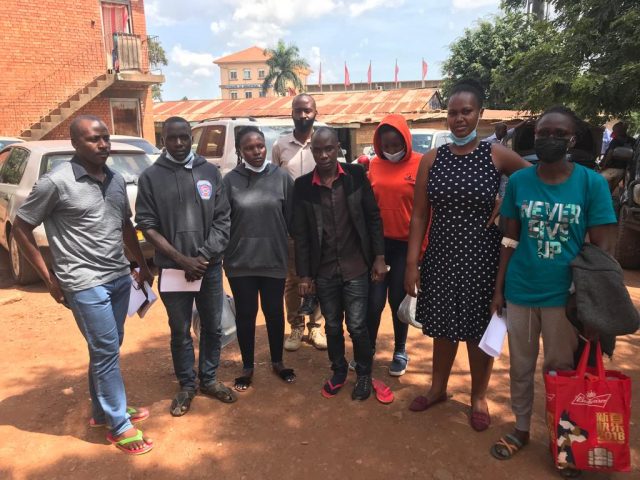 The staffers who included AFIEGO CEO Dickens Kamugisha, and others including Catherine Twongyeirwe, Mercy Nuwamanya, Rachael Amongin, Paul Kato and Patrick Edema were picked up on Friday October 22nd and have since been under incarceration.

According to Police, the staffers were arrested for operating without a permit on instructions of the Uganda NGO Bureau.

AFIEGO is one of the 54 NGOs whose activities were suspended in August 2021 over a number of reasons ranging from non-compliance with regulations to failure to file annual returns and audited books of accounts.

AFIEGO CEO Kamugisha would quickly vow to challenge the decision of the NGO Bureau in courts of law, describing it as mere political persecution.

“This is political persecution. When you do work that they don’t like you become their enemy number number one. We’ll challenge their decision in court,” Kamugisha reportedly told Reuters in August.

AFIEGO has been under immense pressure for defending oil-affected communities’ rights as well as fighting to protect Bugoma forest hence opposing some oil development projects including the upstream Tilenga project, the East African Crude Oil Pipeline (EACOP) and the proposed refinery.

On October 6th and October 7th, Police raided AFIEGO offices in Hoima and Buliisa, Western Uganda arresting the Organisation’s field officers. These would later be released on Police Bond.

Civil Society actors have condemned the arrest and raids on AFIEGO offices calling them political moves targeting those who critic what the government does that is not right.

“Checked on AFIEGO CEO Dickens Kamugisha at Jinja Road Police and later addressed media on targeted harassment against CSO activists in Uganda. The only punishment provided by the NGO Act in case an organization operates without a permit is a fine of UGX 2,000,000,” Sarah Bireete the Executive Director of the Centre for Constitutional Governance said on Sunday.

Several other Civil Society Organisations had joined the call for the unconditional release of AFIEGO staffers saying that the arrests fit a pattern of harassment against critics of multi-billion dollar oil ventures in Uganda.

“For several months, AFIEGO has been the target of continuous and increasing pressure and intimidation from the Ugandan authorities, who want to prevent it from continuing its activities against Total’s mega-oil project,” Amis de la Terre France (Friends of the Earth) and Survie (Survival), a French NGOs said in a statement released on Sunday.