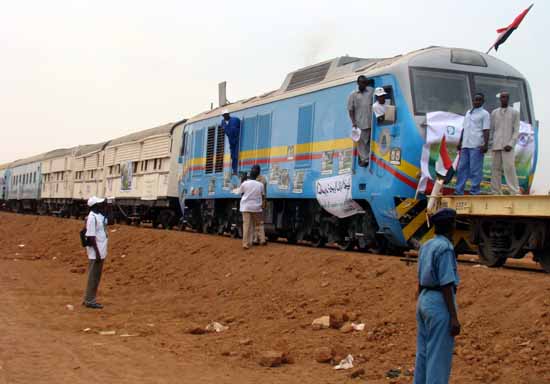 The line between Babanusa of West Kordofan and Wau in Upper Nile State was fully rehabilitated by the United Nations and reopened in 2010, after the signing of the peace agreement in 2005.

However, the line was closed after the eruption of the civil war by the end of 2013. The two countries agreed to reopen the line in 2018 but this has not happened.

Abdel Fattah al-Burhan, Head of the Sovereign Council received Lual who handed him over a message from President Salva Kiir and discussed the need to reopen the 445.5 km railway between the two neighbouring countries.

“This railway is very important for South Sudan and we want to reopen it to improve trade relations between Sudan and South Sudan,” Lual told reporters in Khartoum at the end of his meeting with al-Burhan.

He added this line will allow importing and exporting of products from and to South Sudan through Port Sudan terminals on the Red Sea.

He underscored that for the majority of South Sudanese who are residing in the northern part of the country in the provinces of Bhar El-Ghazal and Upper Nile it would be easier to get their needs through Port Sudan.

He added that the railway that will link the landlocked country through Mombasa, Kenya would be better to serve the Equatoria province.

An international railway is under-construction to link Uganda, South Sudan, Rwanda and the Democratic Republic of Congo to Mombasa terminals.

The development of economic and trade relations between South Sudan and Sudan is seen as a means to ease the tribal tensions in the border areas and to bring the population in the two sides to develop peaceful coexistence.