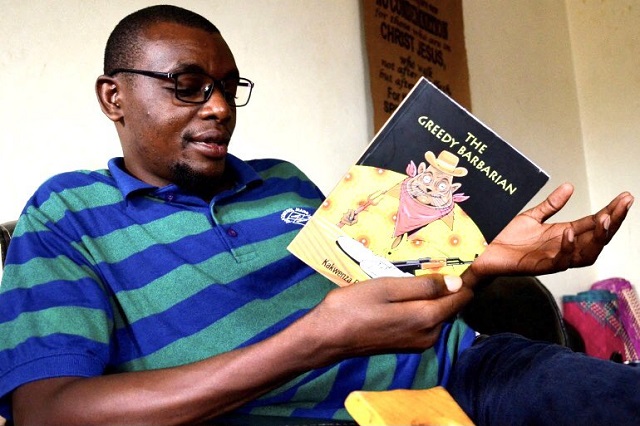 Satirical novelist Kakwenza Rukirabashaija says he has succeeded in fundraising 40 million shillings for his sureties whose arrest court had ordered, for failure to produce him in court.

On January 25, 2022, the Buganda Road Chief Magistrates Court granted Kakwenza a cash bail of 500,000 Shillings and his four sureties were each bonded at a non-cash bail of 10 million shillings. The non-cash bail monies are always paid in the event that an accused person absconds from trial.

The sureties were; lawyer Julius Galisonga, the Secretary-General of the National Unity Platform Party David Lewis Rubongoya, Annah Ashaba, a teacher at Kololo Secondary School and an activist Job Kiija.

The bail was granted to Kakwenza after he had spent nearly a month under detention for offenses related to a series of tweets he posted about President Yoweri Museveni and his son Muhoozi Kainerugaba.

From the nature of the tweets, Kakwenza was charged with disturbing the peace of the President and his son with no purpose of legitimate communication.

As part of his bail conditions, Kakwenza was directed to deposit his passport with the court for a period of six months. But even without the passport, Kakwenza fled the country days after his bail, reportedly through Rwanda, and settled in Germany under Writers-in-Exile, a program that provides grants to authors facing persecution in their home countries.

On March 23, 2022, when Kakwenza was expected to appear before the court, State Attorney Joan Keko asked for a warrant of arrest against him and notices to his sureties to explain why they shouldn’t be arrested.

On Monday when the matter came up again, Keko asked the court to extend the arrest warrant because Kakwenza is yet to be arrested and she also asked court to issue a warrant of arrest against his sureties which the court did.

The court ordered that the said sureties should be arrested and forced to come to court to pay the 10 million shillings each committed themselves to pay in the event that Kakwenza skips bail.

After the order, Kakwenza went on his Twitter handle and started fundraising for money via his MTN number 0785367367 saying that he fled the country for his life but he is financially broke like a mouse at the moment.

Although Mobile Money transactions in Uganda cannot exceed 20 million shillings a day, in less than seven hours, Kakwenza had posted on his Twitter handle that the fundraising had succeeded.

When asked how he has been able to raise the funds, Kakwenza told Uganda Radio Network that he managed to get the monies both through Mobile money and bank transactions.

“It is true. I got it through mobile money in Uganda and bank transactions,” Kakwenza told our reporter.

Kakwenza had planned to solicit UGX 8,000 from at least 5,000 people. It’s not yet clear how many people he got the monies from since he is yet to respond to us with details and the total number of people who contributed to his demands.

The case had earlier been pushed to May 9th 2022 for sureties to return and fulfill their obligations after which their respective warrants of arrest can get cancelled.