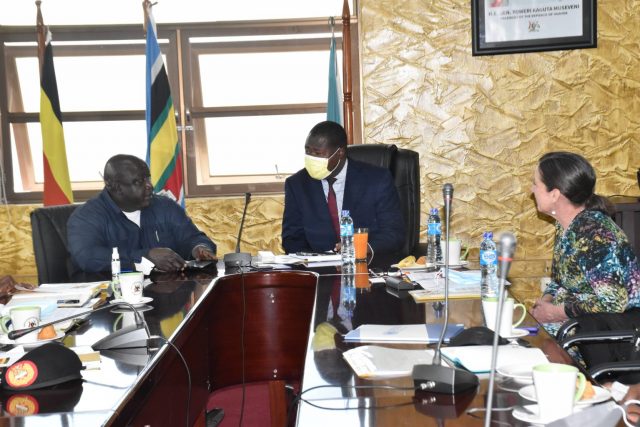 The Minister of State for Defence in Charge of General Duties Hon. Jacob Oboth has met the Assistant Secretary General and Head of United Nations Support Office for Somalia (UNSOS) His Excellency Lisa Filipetto.

The meeting which took place on Thursday April 28th was held at the Ministry of Defence and Veteran Affairs Headquarters in Mbuya, Kampala.

At the meeting, Hon. Oboth and H.E Filipetto shared matters regarding the importance of the African Union Transition Mission in Somalia (ATMIS) and UNSOS in supporting a Somali- led peace and security process in Somalia.

“Your Excellency Madam Lisa, your visit to Uganda is considered another testimony of the United Nations continued support to the regional and sub-regional efforts in search for peace in the world,” Hon Oboth noted.

“We are still committed to do even more. What touches an African touches us all. Any danger to Somalia, is a danger to us all,” noted Hon Oboth. “This is our Pan-Africanism spirit and we can do this anywhere,” he reiterated.

In attendance was also the State Minister for Foreign Affairs Hon. Okello Oryem. In his remarks, he applauded UPDF’s enormous sacrifice in Somalia.

He assured the representatives from UNSOS that Uganda is ready for the next stage of her responsibility in Somalia until the last day. “There is nothing more important than security. For national and regional security, it is important that Somalia is pacified,” Hon. Oryem emphasized.

H.E Filipetto, in her remarks, recognized and commended the ultimate sacrifice made by UPDF in Somalia.

She observed that logistical support to ATMIS, effective and efficient transfer of security responsibilities from ATMIS to Somali the National Security Forces need unity of purpose from the Federal Government of Somalia (FGS), International Partners, Troop Contributing Countries and the UN. “The ultimate vision is for Somalia to take over. We have to work together, we have to stay firm in this partnership, and we have to be committed to this security transition process. If we can be solid in our partnership, and work constructively with the Somali National Security Forces to enable them to do what they have to do, that will be helpful,” remarked H.E Filipetto

Both parties concurred that commitment to a shared vision, timely planning and communication will help deliver the mandate of ATMIS in its expected duration which is April 1, 2022 to December 31, 2024.

The meeting was also attended by the Permanent Secretary of Ministry of Defence and Veteran Affairs Ms. Rosette Byengoma, Under Secretary Finance and Administration Ms. Edith Butuuro, UPDF Joint Chief of Staff Maj Gen Leopold Kyanda, UPDF Military Advisor to the United Nations based Maj Gen Silver Kayemba, and the Chief of Staff Land Forces Brig Gen Bob Ogiki, among others Chiefs and Directors of UPDF.