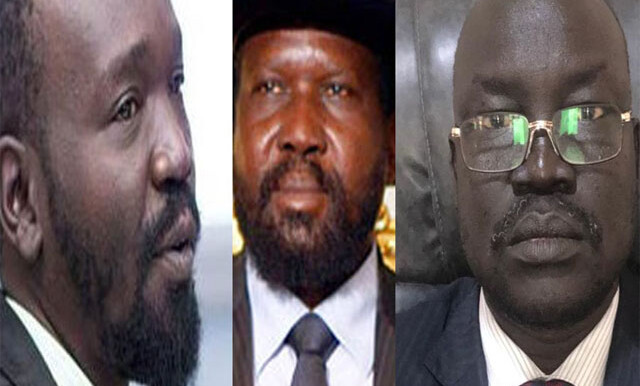 A senior leader of the South Sudan African National Congress party (ANC), a constituent member of the Other Political Parties (OPP), has accused President Salva Kiir Mayardit and the humanitarian affairs minister of violating the 2018 peace deal.

The accusation comes hot on the heels of an annoncement on Tuesday evening where President Kiir relieved OPP’s Warrap State minister of finance and investment Manut Chol Akoon and replaced him.

The minister of humanitarian affairs and disaster management Peter Mayen Majongdit leads the umbrella group within OPP, which is a signatory of the peace agreement. OPP is a coalition of the National Alliance Parties and the Umbrella Parties.

Albino Akol Atak, Secretary-General of the ANC told Radio Tamazuj on Wednesday that the dismissal of the OPP minister is a clear violation of the peace agreement.

He accused the two of excluding the National Alliance party from the peace process.

“There is no unified leadership for the Other Political Parties. We are a collective leadership, and a particular group cannot take the decision on behalf of others and go along with it. And it is assumed that the President of the Republic should not agree to a decision to dismiss the minister without the consent of the two parties,” he said.

Before the formation of the transitional government in South Sudan in February 2022, the OPP split into two groups, one led by Kornelio Kon of the National Alliance, and a group led by Mayen Majongdit of the Umbrella Parties.

Akol said that the state minister dismissed is a member of the African National Congress and that Majongdit has no right to make recommendations to the president regarding his post.

He said, “This is interference in the affairs of other parties, and whoever made the recommendation, we do not know what he wants exactly. Is it excluding others or sabotaging the agreement?”.

“The recommendation is supposed to be made by the six political parties under the National Alliance, and we did not do that. And the president knows that the coalition of political parties is divided into two groups and he knows the percentages of power-sharing in each state,” Akol declared.

Akol, also a spokesperson of the OPP, said the National Alliance has registered complaints with the head of the National Transitional Committee Tut Gatluak, regarding the dismissal of the Central Equatoria State information minister and irregularities in the appointments of members of state and national legislatures.

“The only response was related to the appointment of members of the national parliament, and power-sharing was returned to the group, and we expected that the errors that occurred in the states would be resolved. But unfortunately, the violation continues,” he lamented.

“We condemn and demand that the President of the Republic looks into his decisions so that the political parties under the National Alliance participate in the agreement,” Akol added.

South Sudan’s peace agreement is expected to expire in February next year, but this must be preceded by a general election in the country in December 2022. However, the implementation of the peace deal is sluggish despite regional and international pressures. Many provisions of the deal that would lead to elections remain pending.