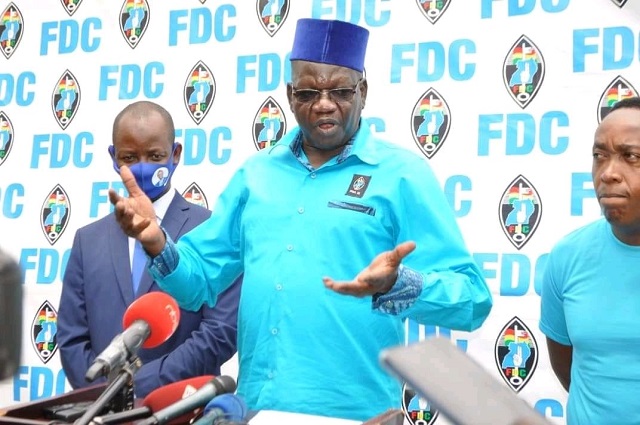 The Forum for Democratic Change – FDC party president Patrick Oboi Amuriat has described the Busongora South parliamentary by-election as a sham and a total failure of democratic practices in Uganda. Amuriat says that the party’s top leadership will soon convene a meeting to discuss if they should continue participating in future electoral process or not.

The party is also considering not to challenge the results of Thursday’s by-elections because they do not think they can get justice in the court system. On Thursday, the Kasese district returning officer, Ismail Atwijukire Takih declared Gideon Mujungu of the National Resistance Movement-NRM as the winner of the by-election.

Amuriat questioned the validity of election results, citing irregularities which altered the would-be viable results, and insisted that what transpired in Busongora by-election was not an election but rather a military operation.

He noted that the by-election was characterized by brutal arrest of the FDC candidate, malpractices, and voter bribery among others, which made the opposition think it is a waste of time to participate in future elections.

Amuriat said the party is not willing to take legal action because they don’t have any hope that the future electoral process can be better.

Robert Centenary, the FDC mobiliser said the Electoral Commission Chairperson Justice Simon Byabakama and his commissioners cannot be excluded in the whole “illegal” process because they failed to respond to concerns that were raised during the voting.

The Kasese FDC chairperson Saulo Maate said that they have overwhelming evidence of vote bribery but mentioned that this was a learning lesson that the current government cannot allow a free and fair election.

He therefore thinks opposition must find other alternatives to power other than being hoodwinked to take part in election that is already pre-determined.

Ismail Atwijukire Takih has not yet commented on the accusations leveled against the commission by the opposition leaders.