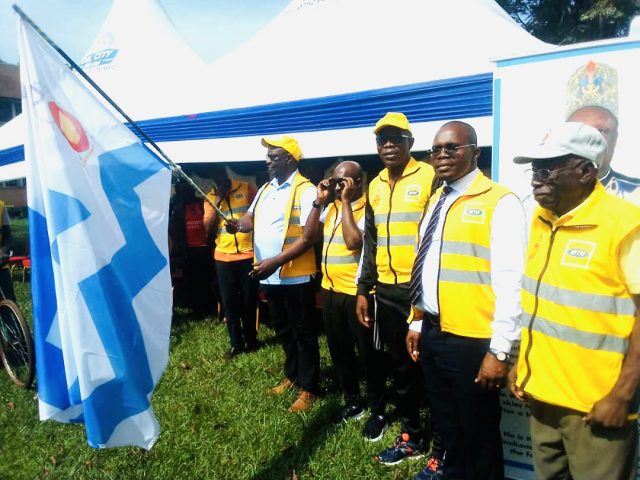 On the morning of Saturday, the past weekend, Hoima city was graced with the MTN-Bunyoro-sponsored bicycle races as participants and supporters lined up in the city streets to witness the event.

The race being the first of its kind in the area, attracted thousands of spectators as they supported their friends and family in pursuit of the set race prizes and overall fun activity of the day.

While flagging off the bicycle race at the kingdom headquarters Patrick Katende said that the Omukama of Bunyoro Kitara kingdom Solomon Gafabusa had embarked on the idea of the bicycle races as one way of promoting peace and unity among the his people living in Bunyoro sub-region.

“I am elated and proud that when we joined hands with MTN Uganda to support the Kingdom’s agenda, they responded very fast and supported the idea.” Katende said.

Katende added that with support from MTN they expect to conduct the event annually across the entire counties in the kingdom.

Dr. Joseph Ruyonga, the West Member of Parliament Hoima district, appreciated MTN for its support towards the kingdom of Bunyoro Kitara.
He also encouraged more people to embrace cycling as a sport because it helps promotes physical well-being.

“Sports and games are very critical for good health because the body is always active and it promotes harmony and togetherness and I urge the people to take it on.” Ruyonga said.

The five winners from Hoima city will participate in the grand finale which is scheduled to take place in November in Hoima town.
The winners for Hoima City where Alinda Living who got 500,000 after emerging as the winner. David Atugonza the second runner up got 400,000, Bryan Baguma the 3rd who got 200,000, Wilber Bategeka and Yusufu Kawiso who got 100,000 each.

Alongside the races in Hoima city, another MTN-sponsored bicycle race was happening for Hoima district that had the Bunyoro Kitara Prime minister present Andrew Byakutanga.

He congratulated the winners and appreciated the residents for giving the bicycle races 100% participation and recapped the grand finale cash prize of UGX 3 million to be won on 12th November this year as the races conclude.

MTN Uganda as the sole sponsor of the Bunyoro Kitara kingdom empaka ze gaali 2022 has been rewarding each of the top five winners in the races that are set to take place in all 13 counties of the kingdom ahead of the grand finale that will be held in Hoima City.

The first-ever bicycle race competition sponsored by MTN Uganda was recently successfully concluded in the Tooro Kingdom and the Ker Alur Kingdom. More such races launched in other cultural institutions namely; the Busoga Kingdom and Ker Kwaro Acholi.

MTN Uganda is committed to championing cultural heritage to foster unity and togetherness through sponsoring sports initiatives that also act as a platform for talent identification and a place to create awareness around social issues to bolster community growth and development.