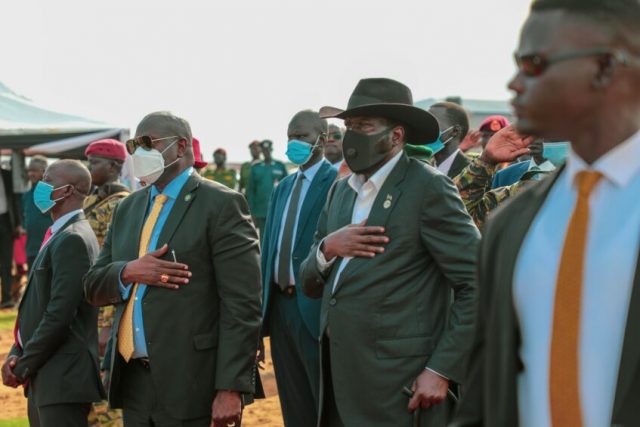 President Salva Kiir and First Vice President Riek Machar have called for peace in the Upper Nile State, days after the cabinet asked the presidency to address the conflict.

Kiir and Machar made the call on Tuesday during the state burial of Lt. Gen Alfred Akwoch, a veteran liberator who passed on in Kampala, Uganda last Friday.

In his speech, President Salva Kiir appealed to the leaders to end the violence in the area.

Kiir also called for forgiveness among the people of Upper Nile State for the sake of peace in the area.

“On the issue of peace in Upper Nile, all of us, including you who are here, let us unite our hands and work hard to bring peace to Malakal,” said Kiir.

“When I see Malakal on TV, I can’t believe it’s the Malakal I was staying at. Because when I was in Malakal it was a very beautiful city and was a cheap city among the cities of South Sudan, but we destroyed it,

“Our people are supposed to change hearts and not allow anyone to kill another person or destroy someone’s home… That’s all we need forgiveness, if people are willing to forgive themselves, we will be able to bring the people together.”

“Upper Nile in particular, had been peaceful but lately there have been triplanes, particularly in the Shilluk Kingdom and neighboring states,” said Machar.

“I want to appeal to all of us, particularly those who come from Upper Nile let’s copy the example of Alfred, let’s ensure we bring peace to Upper Nile,

“Upper Nile deserved peace and therefore we must call upon all our young people that they must hit to peace,

“We [cabinet] yesterday [Monday] discussed Upper Nile in length regarding the security in the area, we have made a decision that we hope will bring peace to this dear state.”