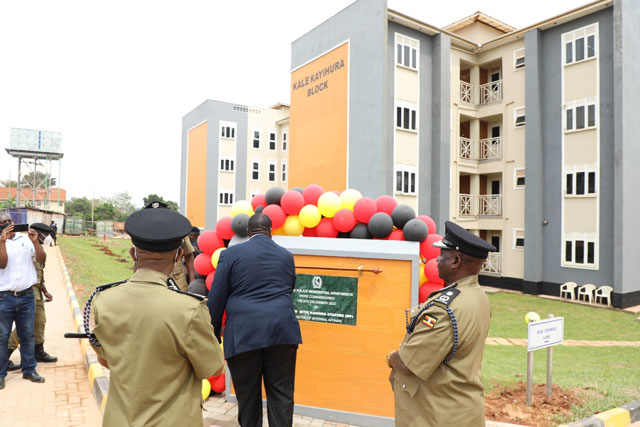 At least 420 out of the 1,020 police housing units at Naguru police headquarters have been commissioned by the Internal Affairs Minister, Maj Gen. Kahinda Otafiire. Despite this, Otafiire notes that Uganda Police Force needs over 40,000 housing units to cater for personnel living in disgraceful conditions.

There are over 52,000 personnel and more than 12,000 living in police barracks in Kampala Metropolitan Area. However, Otafiire said the houses in the barracks he has visited in Kampala and other areas are a disgrace to the police force.

The Police Housing project was launched in September 2016 by then Inspector General of Police, Gen Kale Kayihura and it was projected to be complete by 2018. Kayihura was sacked by President Yoweri Museveni on March 4, 2018, when the project was still struggling because of meager finances.

In order to address the problem of police housing, Gen Otafiire advised the police to secure wealthy individuals to build them houses and demand payment from the government later. The seven blocks comprising 420 housing units cost 57.1 billion Shillings according to Director of Logistics and Engineering, AIGP Richard Edyegu.

Erinayo was the first African IGP after Uganda attained her independence from the British. Kayihura served as IGP for more than 12 years and a lot of police achievements are attributed to him. Other blocks have been named after former IGPs John Kisembi, Cossy Odomel, Katumba Wamala, Luke Ofungi, and the reigning IGP, Okoth Ochola.