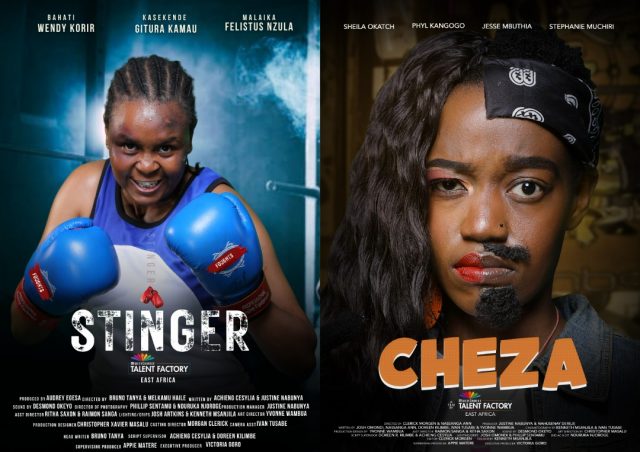 It’s an exciting time for the East African cohort of the MultiChoice Talent Factory’s (MTF) Class of 2022 as their feature films are set to take centre stage and premiere on the silver screen!

The original feature films, which are part of the academy’s curriculum, are a culmination of the skills and techniques that all 19 students at the Academy learned in the lead up to their graduation.

Stinger is a family drama that follows the story of Bahati, a 19-year-old girl who drops out of school due to financial constraints. Bahati is determined to get vengeance against her polygamous father, who has been constantly abusing her mother. She embarks on a journey to learn boxing, only to find out that she can also escape poverty through the sport. The feature film was directed by Bruno Tanya and Melkamu Haile and produced by Audrey Restetua Egesa.

Cheza follows the story of struggling solo musician Khana, who dreams of winning a cash reward and a record deal in a band competition. The only problem is that she needs to be in a band to participate. Thus begins her quest to join an all-male band and take vengeance on the rival musician who stole her ideas. Cheza recently won the Best Student Feature Film at the 12th edition of the Kalasha Film and TV Awards. Proudly produced by Justine Nabunya, Nahusenay Dereje and directed by Clerick Morgen and Nassanga Ann.

“It’s a pleasure to see the work of the students come to fruition through these films. The opportunity to collaborate on creating a powerful story honours our many African stories and paves the way for the next generation of storytellers,” says MTF Director Nwabisa Matyumza.

The MTF Academy is a great opportunity for aspiring film and television professionals to learn from some of the best in the business. The academy offers a 12-month immersion programme that provides theory and hands-on experience in cinematography, editing, audio production, and storytelling in three regions and 13 countries across Africa. This is a career-defining opportunity for anyone who wishes to pursue a career in film or television.

“We’re immensely proud of what the students have achieved with these films. They’ve demonstrated the true essence of what it means to be a creative professional: collaboration, grit and a belief in the power of African stories. We’re equally grateful to all the MTF partners that have played an important role in turning the students into graduates,” says MTF East Africa Academy Director, Victoria Goro.