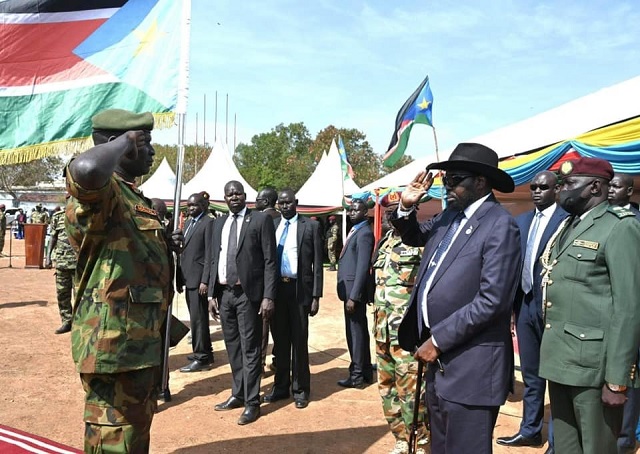 South Sudanese President Salva Kiir on Wednesday bid farewell to more than 700 peacekeepers to be deployed in the neighboring Democratic Republic of the Congo (DRC).

Kiir told the troops to stick to the mission, maintain discipline and stay away from criminal activities.

“I want you to maintain discipline. There are forces that go for peacekeeping mission in another country and cause problems; they rape women and girls. Don’t do it. Don’t take anything from shops or civilians, and that is not what you have gone for; instead, protect the lives of the civilians from danger,” Kiir told the regional force in Juba, the capital of South Sudan.

South Sudan is sending a battalion of more than 700 strong forces allocated by the East African Community Regional Force to the Democratic Republic of the Congo (EACRF-DRC) to fight the M23 insurgency in the eastern part of DRC.

Kiir told the peacekeeping force to maintain order to bring about a good image of the country through the mission.

“I have handed over the flag of South Sudan to your commander, this flag should be raised high, and it should not be lowered. I want to tell you that you are one army for this mission; you are going as South Sudan Army,” he added.

Angelina Teny, minister for Defense and Veteran Affairs, said the country is proud to be part of the regional peacekeeping force to contribute to peace and stability in the region and global peace, stressing that it is an opportunity to portray a good image of South Sudan.

Teny revealed that the force will be sent to the DRC immediately and will be stationed in Goma, adding that South Sudan is the only country yet to send the peacekeeping force to the DRC.

Since late March, M23 has been on the offensive in DRC’s northeastern province of North Kivu, with thousands of civilians displaced by ongoing fighting.

Kenyan former President Uhuru Kenyatta in June called for the immediate deployment of a new regional military force to try to stop rebel violence in eastern DRC, where dozens of armed groups have been active for more than two decades.