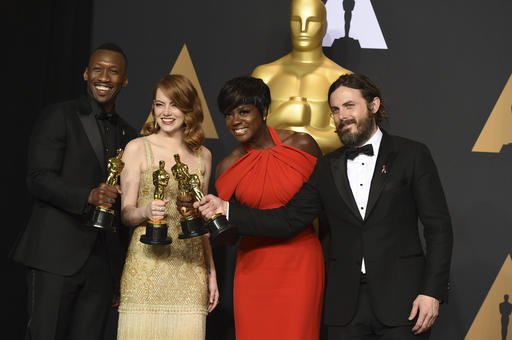 The 89th Academy Awards show was certainly one for the books. After it was all said and done, front-runner “La La Land” won 6 out of its 14 total nominations including best actress and best director.

But the most shocking moment of the night went to “Moonlight,” which won best picture, after “La La Land” was mistakenly announced.

“This is not a joke,” a producer from “La La Land” said while standing on stage, correcting the big error. Then, the cast and crew of “Moonlight” eventually took the stage and accepted the award.

“Fences’ Viola Davis also took home her first Oscar for best supporting actress and got an enthusiastic standing ovation from the crowd.

“I became an artist and thank God I did because we are the only profession that celebrates what it means to live a life,” she exclaimed while breaking down as she thanked her parents, her sisters and her husband and child.

Casey Affleck and Emma Stone chose to pay homage to their fellow nominees. Affleck called Denzel Washington “one of the first people who taught me how to act.” Stone said, “it’s such an honor to stand beside you!” and added, “Ryan Gosling, thank you for making me laugh and being the greatest partner.”

Best actor in a supporting role

Lucas Hedges – “Manchester by the Sea”

“Fantastic Beasts and Where to Find Them” — WINNER

“I Am Not Your Negro”

“Rogue One: A Star Wars Story”

“13 Hours: The Secret Soldiers of Benghazi”

Best actress in a supporting role

Michelle Williams — “Manchester by the Sea”

“Kubo and the Two Strings”

“My Life as a Zucchini”

“Fantastic Beasts and Where to Find Them”

Kenneth Lonergan — “Manchester by the Sea”

“Manchester by the Sea”