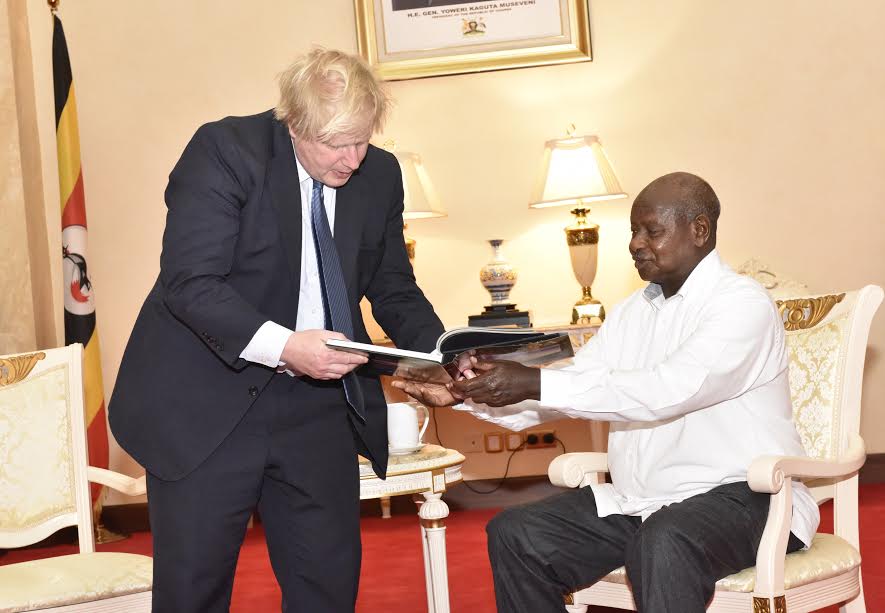 President Yoweri Museveni and the British Secretary of State for Foreign and Commonwealth Affairs, Mr. Boris Johnson, have held bilateral and fruitful discussions centring mainly on trade and investment between Britain and Uganda.

“Uganda’s economy is growing much faster and we look at increasing investments in the country,” Mr. Museveni told his guest. He informed Mr. Johnson that the Government of Uganda, under the NRM Government, has gone a long way in solving many internal challenges in the country adding that what is remaining is to reduce high costs on electricity, transport, finances as well as maintaining and consolidating security.

The meeting took place last evening at State House, Entebbe after which the President and Mr. Johnson held a joint press briefing.

“We have had fruitful discussions. We have held talks pertaining to trade and investment between Uganda and Britain. We have also discussed the prevailing situation in Somalia and talked about the situation in the region,” the President said.

President Museveni told the media that the main target of the bilateral meeting centred on ensuring that Somalia gets the capacity to build a national army and stop dependence on outside support.

The British Secretary of State for Foreign and Commonwealth Affairs Right Hon. Boris Johnson said “I salute President Museveni for promoting peace in the region with particular reference to Somalia. I thank him for the economic growth that he has facilitated in Uganda.”

He expressed his pleasure for having inspected a guard of honour in Somalia on Wednesday morning that was mounted by UPDF, noting that it has played a leading role in AMISOM. He paid tribute to the Uganda Government for its role in the peace process in Somalia.