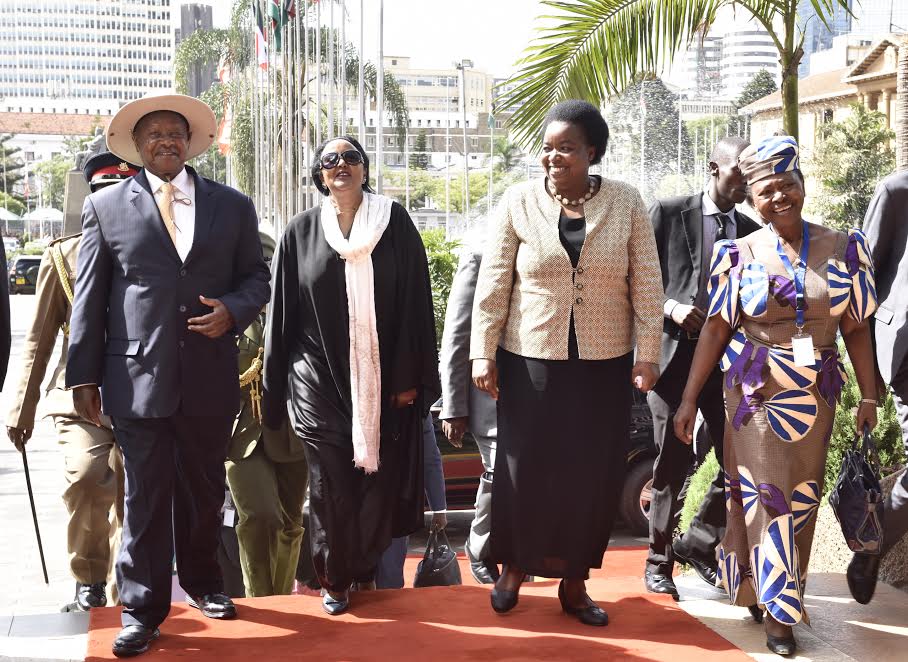 President Yoweri Museveni in one of his most radically candid addresses on refugees has told a special IGAD summit on Somalia that refugees are not the problem but the wrong ideology of sectarianism where people are divided along tribal, religious and other grounds is.

“Africans are categorized in four linguistic groups namely; Bantu, Nilotics, Sudanic and cushites. I have no problem with all these groups settling anywhere on the continent since they are all Africans and considered brothers and sisters. What concerns me most is the ideology of sectarianism where people are artificially divided along tribal, religious and other grounds,” he said

The President was addressing a special IGAD Summit on Somalia Refugees hosted by President Uhuru Kenyatta of Kenya and chaired by Ethiopia Prime Minister who is also chair of IGAD Hailemariam Desalegn. The summit was held under the theme, “Towards durable Solutions for Somali Refugees and Sustainable Reintegration of Returnees in Somalia” at the Kenyatta International Conference Centre in Nairobi, Kenya.

The IGAD leaders who went into a closed session immediately after the opening ceremony at Tsavo Hall are seeking a comprehensive plan of action towards solutions for the protracted internal displacement of people and with a focus on finding a lasting solution to Somali Refugee crisis.

President Museveni is quoted as telling IGAD leaders that the main causes of refugees and internally displaced peoples in Somalia and on the continent include; criminal actions by governments that threaten the safety of their citizens; weak states that are not able to defend their populations; criminals that have killed people in countries of origin, citing the intarahamwe of Rwanda who committed a genocide and fled to Congo and natural disasters such as drought being experienced in the region.

The President called for immediate action to address issues relating to refugees and internally displaced people including relief during the time of refugee, clean water for domestic use, electricity to minimize environmental abuse, shelter that is environmentally friendly like prefabs to avoid destruction of trees etc.

“Refugees and displaced persons need an education so that they don’t lose time. They also need to acquire skills which can enable them participate in production in the countries where they are and also when they return home,” Museveni said.

He called on the international community to provide capital for small enterprises in development efforts as opposed to refugees being limited to the camps.

“Freedom of movement is important so that refugees can look for self sustaining opportunities. There should also have a right to return and an appropriate environment for their absorption in society,” he said.

On the issue of land, President Museveni said whereas Uganda’s liberal policy of providing lad is praised, it is not sustainable as land can only be provided if available. He also cautioned that refugees should not be seen to be enjoying better amenities than the host communities and that when they leave, the situation of the local communities should not be worse off.

While opening the IGAD Summit host President Uhuru Kenyatta commended IGAD Heads of State for their commitment saying that their presence in Kenya is reflection of the willingness to address the problem of refugees.

He said that a refugee camp is not a sustainable solution, indicating that now is the opportune time for Somalis to return and rebuild their country.

“A refugee camp was never meant to be a permanent home, nor is being a refugee a promise of losing your citizenship and your country. These people should participate in the building of their nation,” he said.

Commenting on the Daadab Refugee Camp in Kenya, Kenyatta said that life has not been easy for refugees there and that the camp has long lost its humanitarian character.

“It is not acceptable to us that a space that is supposed to provide safety and assistance is transformed to facilitate agents of terror and destruction,” said President Kenyatta.