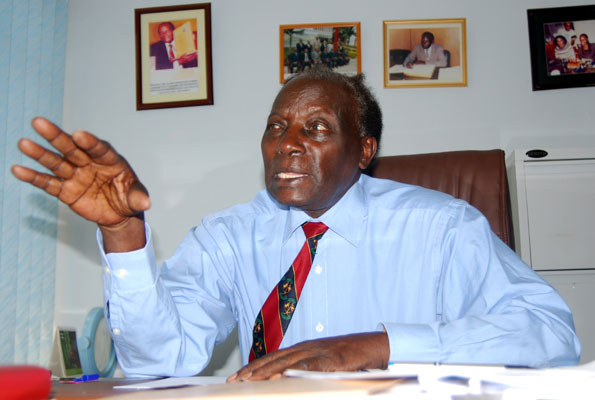 Retired Supreme Court judge George Wilson Kanyeihamba has responded to the ongoing wave of insecurity characterised by threats of hit lists and attacks.

There has been a series of attacks by unknown assailants in Greater Masaka districts and recent cases have been reported in some Kampala suburbs including Najjera and Namugongo.

But the case that thrown many into fear is the shooting last month of hitherto Uganda Police spokesperson Andrew Felix Kaweesi, his body guard and driver.

According to Kanyeihamba, Ugandans are left with only one assurance of security: God.

Kanyeihamba told NBS TV on Monday: “God is the only protector that we are left with, don’t talk about security.”

Referring to media reports that there was a list of prominent businessmen and other VIPs, which the assailants have threatened to harm, Kanyeihamba said the country was rife with fear.

“Most Ugandans who don’t believe in God as I do are frightened out of their wit. They say there is a hit list for businessmen and VIPs… Really, must we talk about security? Security is no longer there,” he said .

“When they are still investigating the assassination of the late AIGP, Andrew Felix Kaweesi, a [another] headline reads: [an army general] has been arrested, and many police officers were involved. Who can talk about security in this country? We are living on the mercy of God.”

He also claimed that the president and his ministers were also not sure of their security.

“And I am sure that even the President himself and the cabinet are worried for their security. Please don’t talk about security anymore in Uganda. In our minds, it’s not there anymore.”

On Monday, Police chief Kale Kayihura paraded suspected criminal gang members at the Katwe Police Station in Kampala. He also noted that progress was being made in nipping the activities of criminal gangs in the bud.