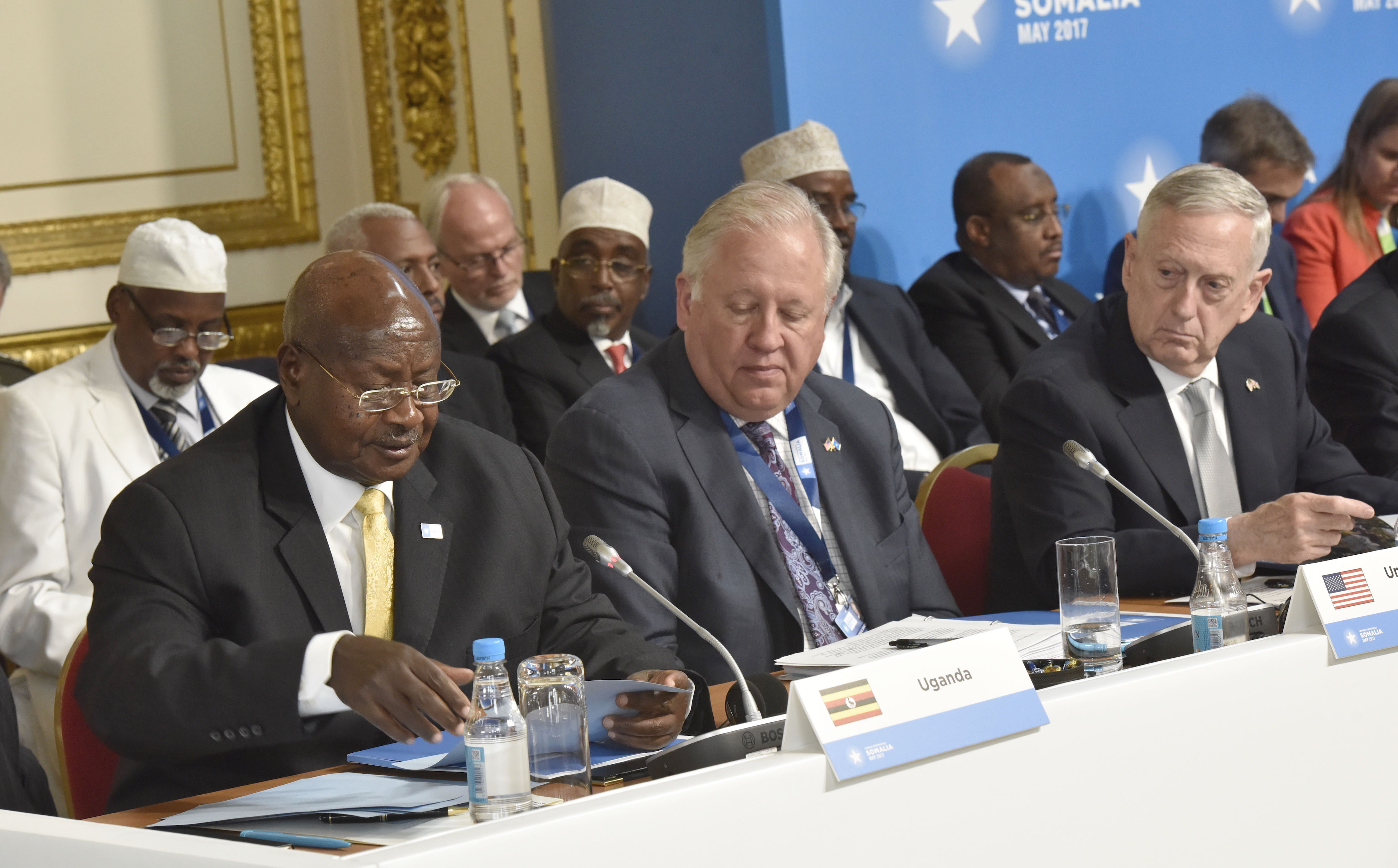 Uganda’s President Yoweri Kaguta Museveni addressed the Somalia Conference in London on May 11, 2017. Uganda is one of the nations contributing forces to the joint regional troops attempting to pacify the war-ravaged horn of Africa nation. In this full speech, Museveni talks this and more on Somalia.

Excellencies Heads of State and Government;

Uganda was the pioneer troop contributing country with the leading elements of our first contingent landing in Mogadishu on the 6th of March, 2007.

Many observers were convinced that our effort was hopeless, if not suicidal.  We were, however, confident of the correctness and feasibility of our decision.  This was due to our knowledge of the African peoples, those people that have inhabited this area for the last 4 million years.

Many of the African societies live symbiotically with one another, utilizing their diversity for mutual benefit.  Bigotry, which seems to characterize some societies in the world, is not common in African societies.  I normally tell my Moslem friends that, according to my culture my list of haram (ebihagaro) is much longer than theirs.  It is not only pigs that we regard as haram.  Our list includes: fish (ebijongoma) which we regard as snake; chicken (because it is a bird that are always flying) and if you eat it you are likely to be restless and unsettled; mutton; etc., etc.

Nevertheless, we used to rear chicken for use in divination in the traditional religions. Moreover, our people would happily donate chicken to our neighbouring communities who relish the consuming of those creatures. The same applied to fish, mutton, etc. In other-words, our philosophy was: “live and let live” ─ enjoy your rights but do not interfere with the rights of others.  Our communities specialize in skills and products and exchange ─ goods and services. That is how we were able to build a strong civilization that withstood the assaults we suffered from the slave-trade, colonialism and the local tyranny of our myopic and ego-centric chiefs.

Therefore, when we heard of the bankrupt ideology of bigotry being pushed by groups from Asia and the Middle East being imposed on the people of Somalia, we had to send a clear message to them and Somalia was one of the rendezvous points between the two diametrically opposed world outlooks: live and let live or chauvinism.

Since that time, the following have been achieved:

The Troops Contributing Countries have increased to five. These are: Uganda, Burundi, Kenya, Ethiopia and Djibouti.

The Somali Government moved from exile in Kenya where it had been based to Mogadishu since 2007.

The International Organizations also relocated to Mogadishu from Nairobi-Kenya.

Many Al-Shabaab dominated areas have been liberated. The Ugandan contingent alone stretches from Mogadishu to the Sea Port of Barawe.  This is not to talk of the areas liberated by the brother contingents from Ethiopia, Kenya, Burundi and Djibouti.

There are many noticeable reconstruction activities in many parts of Somalis, especially in Mogadishu, in the form of private buildings, roads, a modern Airport, etc.

Businesses are thriving in Mogadishu.

Indirect elections have taken place a number of times since 2000. The most recent election was the one of President Mohamed Abdullahi Mohamed (Farmajo) and the new Parliament.

The menace of piracy at Sea has been tamed.

However, our strongly held view is that it is not enough to check Al-Shabaab. Somalia must heal completely and stand on its own feet.  In our view, there are a number of bottlenecks that stop the complete healing of Somalia.

(i)    The absence of patriotic, pan-Somali political parties.

There may be individuals who have got a pan-Somalia outlook.

These individuals, however, need to form political Parties with a patriotic, national outlook, away from the bankrupt ideology of clanism being pushed by opportunists.  The recent election of the President by an overwhelming consensus seems to be a healthy seed for the future.  This patriotic idea, however, needs to be translated into political organizations.

(ii)   The same patriotic ideas must then be infused in the Somali National Army recruited on a quota basis from all parts of the country.

(iv)   The multiplicity of trainers (from different countries) of the Somali Army needs to be coordinated by the Somali Command around a Somali forces military doctrine so that it becomes a cohesive force with a clear historical mission.

(v)    The Somalis need to resolve the issue of whether they will re-build the Somali Army by pay or patriotism. If it is by pay, who will pay them? Is the Somali State able to pay a large Army on that big territory of 637,657sqkms it needs so as to pacify the whole country? The present partial pacification of the country is not good enough.

Can the international community agree to pay a large Somali Army for some years so that the wholly liberated Somali territory can be used to generate revenues to pay the public servants and also cope with other obligations?

(vi)   The Somali Army and the soldiers from the TCCs could be further equipped to do more road projects in the areas of their responsibility along with the local authorities so that the country is opened up.  They can also build schools and health centres for the benefit of the people. The liberation has to resonate with the people in the countryside.

(vii)  In the meantime, the TCCs should be supported sufficiently, their small numbers notwithstanding, to use force multipliers (gun-ships, attack planes, air-lift means) to further weaken Al-Shabaab, in their remote hide-outs.  Our concept of counter-insurgency is to have mobile forces to hit the enemy and zonal forces to ensure that the enemy does not re-infest the area.  It should be the Somali Army to provide these zonal forces.  If they cannot do it yet, what should we do?  That is why we propose long jump operations to eliminate them by surprise attacks. It is better than giving them extended holidays without any punishment for their mistakes and allowing them to create liberated areas by default.

(viii) There is the short term issue of the drought.  We need to provide relief so that the long-suffering people of Somalia do not die from this additional problem.